Fetid with winter's dead leaves,
the soil, as it warms
in spring, elbows out off its bed
the split seed ... 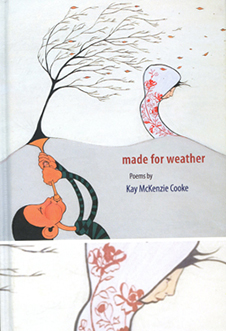 Cooke's theme, like Robin Hyde's, is one of finding 'a home in this world': hers is an authentic poetry of place, with a fidelity to experience comparable to that of other more established poets such as Bernadette Hall or Brian Turner. Poems contain an array of striking images, developed from Cooke's exposure as a child and adolescent to the wind-whipped coastline of Orepuki, now a ghost town on the eastern fringe of Te Waewae Bay, near Fiordland.

The passing of seasons features in the background of scenes which are dominated by ostensibly contemporary concerns such as a wild and woolly boyfriend, or collecting toheroa. The poet has a gift for capturing people in day-to-day, incidental situations. Cooke has forged poetry out of common speech which synthesises unpretentiously the elemental energy at her fingertips.

KAY McKENZIE COOKE is an ex-Southlander who lives and works in Dunedin. She won the Jessie Mackay Best First Book Award for her poetry collection, Feeding the Dogs, at the 2003 Montana New Zealand Book Awards. Her poetry has also appeared in a range of literary journals and anthologies.