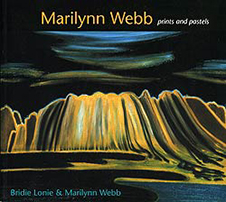 'Tastes in art are as varied as they are in food, but the words and images we are offered by Lonie and Webb can't help but interest and educate anyone with a lively mind.' – Wairarapa Times Age

An outstanding artist and art educator, Marilynn Webb gained international stature as a print-maker early in her career. Working as an art adviser in Northland and Auckland she created memorable images that were instantly recognisable as coming from her hand.

Less well-known are her pastel drawings, a development in her work after she moved to Dunedin in 1974 to take up a Frances Hodgkin Fellowship. She has created several brilliant series based on New Zealand's southern wilderness areas: Lake Mahinerangi, the Ida Valley, Fiordland and Stewart Island in particular. Her work makes us aware that we are always in the landscape, and draws us into the environmental and social issues surrounding it.

Marilynn Webb: Prints and pastels explores Webb's career and surveys her work. It contains an essay by Bridie Lonie and full chronology, and is illustrated with over 60 reproductions of works from the 1960s through to the present. These give wonderful overview of her development and concerns as an artist.

Of part Nga Puhi descent, Webb trained under the Arts Advisory Scheme and worked as an arts adviser for the Department of Education in Auckland and Northland, and the Northern Maori Project. The framework from this experience, particularly its community base, has sustained her throughout her career.

While in Auckland she began a series on nuclear testing. Other areas of concern have been the flooding of the Clutha valley with the Clyde dam and the destruction of the tussock habitat on high country farms. Gallery commissions often herald major developments in her art and subjects. 'Taste before Eating' was commissioned by the Dowse Art Museum as an alternative recipe book for the government when it was 'thinking big'.

Eastern Southland Art Gallery, a cultural centre that considers it vital to respond to its community's needs, in 1994 brought together a number of southern artists, including Webb– her resulting pastels on the Mataura River are major works. New relationships were also forged in the late 1990s between artists and the Southland Conservancy of the Department of Conservation. This provided Webb with access to remote and beautiful landscapes whose natural history she would inscribe in a new synthesis of print technique. Several major projects, including 'From Hodge to Hodgkins to Here', resulted.

Webb's work has been exhibited extensively throughout New Zealand and internationally in Australia, United States, India, Japan, Yugoslavia, Germany, Italy, Norway, Spain and the United Kingdom. She has lectured in printmaking at the Otago Polytechnic School of Art since 1988 and her students include many of New Zealand's interesting new artists. In 2000 she became an Officer of the NZ Order of Merit for her contribution to printmaking in New Zealand.

BRIDIE LONIE is course coordinator in Art History and Theory, at the Otago Polytechnic School of Art.

MARILYNN WEBB was a senior lecturer in printmaking, Otago Polytechnic School of Art. She was made Emeritus Principal Lecturer in 2004.