Politics in the Playground (out of print)

The world of early childhood in New Zealand 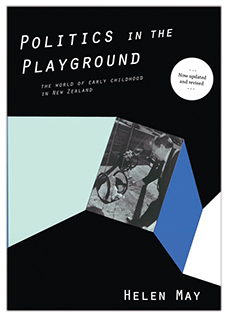 Politics in the Playground is a lively account of early childhood education and care in postwar New Zealand, following on from the author’s study Discovery of Early Childhood (1997), which traced the origins of institutional care for young children in Europe and New Zealand.

The place of children in New Zealand’s social history also makes this book a remarkable record of social movements. The postwar search for security, the radicalism of the 1960s and 1970s, the rise of feminism, the role of the state in social issues, increasing employment of women – all have impacted on early childhood education. The language of the debate has shifted from ‘social progress’ in mid-century, to the economic terminology of the 1990s, and some cautious consideration of the young child citizen in the 2000s.

This is an account of critical issues for children that will interest parents along with policy makers, teachers, and students.

HELEN MAY is a former Dean of the University of Otago College of Education. She began her career as a primary school teacher in the mid-1960s, worked in childcare in the 1970s, and began tertiary teaching in the 1980s. During the early 1990s she worked with Margaret Carr on the development of Te Whāriki, New Zealand’s first national curriculum for early childhood education. In 1995, she was appointed to the first New Zealand professorial chair in Early Childhood Education at Victoria University Wellington and in 2005 she was appointed Professor of Education at the University of Otago. She has published six books as sole author.

'Politics in the Playground is a most readable, well-researched and engrossing text. This could well provide an informative background learning opportunity to early childhood providers and training students, in fact I would recommend it as required reading for anyone interested in any aspect of education in New Zealand.' – Good Teacher, 2009

'Helen May has done more than any one person to sew together events and memories into the backstory so necessary for the early childhood sector's self identity ... As a whole, Politics in the Playground is still the book that defines the historic politicking in and around ECE. It's good to see the updated version covering the years of relative warmth from central government.' – Early Education, Volume 45, Autumn/Winter 2009