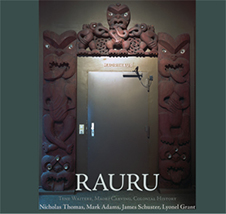 Tene Waitere of Ngati Tarawhai (1854–1931) was the most innovative Maori carver of his time; his works reached global audiences decades before the globalisation of culture became a fashionable topic. Rauru is the highlight of a famous anthropological museum in Germany. Hinemihi, the carved house featured in one section of this book, sheltered survivors of the Tarawera eruption in 1886 before being removed to the park of an English country house. His carved Ta Moko panel is one of Te Papa the Museum of New Zealand's icons.
Three out of four historic Maori meeting-houses located outside New Zealand were carved or partly carved by Waitere. The travels of his work tell us something about the interplay between empire and art, about what is made of history now. The combined perspectives of his descendants, of a leading contemporary carver, of a master photographer and a distinguished anthropologist and historian of Pacific art make this book unique as a dialogue as well as a revelation of great works of Maori art.

MARK ADAMS was born in Christchurch in 1949. He is one of New Zealand's most distinguished documentary photographers, working with subjects of cross-cultural significance. His photographs have been exhibited through solo and group exhibitions and major biennales throughout the world. His other books include Cook's Sites: Revisiting History (with Nicholas Thomas).

NICHOLAS THOMAS was born in Sydney in 1960. His books include Entangled Objects (1991), Oceanic Art (1995), Possessions: Indigenous Art/Colonial Culture (1999) and Discoveries: the voyages of Captain Cook (2003). He has collaborated on several projects with Mark Adams, and curated many exhibitions, in New Zealand, Australia and the United Kingdom. He is Professor of Historical Anthropology, and Director of the Museum of Archaeology and Anthropology at the University of Cambridge.

'... a fascinating account, through the lens of a highly gifted practitioner, of the circulation of indigenous art within a global context of empire, tourism and trade ... It's an informative and thought-provoking book.' – New Zealand Herald, 15 August

‘Rauru … is both a very beautiful and interesting book … a successful one in which history, sociology and biography are married to an ancient art.’ – Otago Daily Times, 25 July

'Photographer Mark Adams has been working at the fertile interface of Pakeha, Maori and Pacific culture for more than three decades, and his elegant, large-format pictures are a highlight of Rauru, an "experimental" study of the colonial-era Maori carver Tene Waitere.' – Your Weekend, 15 August