A nation's response to refugees and asylum seekers 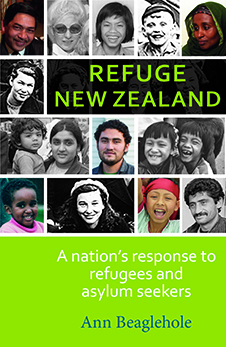 Unlike people who choose to migrate in search of new opportunities, refugees are compelled to leave their homeland. Typically, they are escaping war and persecution because of their ethnicity, their religion or their political beliefs. Since 1840, New Zealand has given refuge to thousands of people from Europe, South America, Asia, the Middle East and Africa.

Refuge New Zealand examines New Zealand's response to refugees and asylum seekers in an historical context. Which groups and categories have been chosen, and why? Who has been kept out and why? How has public policy governing refugee immigration changed over time?

Aspects of New Zealand's response to refugees and asylum seekers considered in the book include: the careful selection of refugee settlers to ensure they will 'fit in'; the preference for 'people like us' and the exclusion of so-called 'race aliens'; the desire for children, especially orphans; responses to the increasing diversity of refugee intakes; the balance between humanitarian, economic and political considerations; and the refugee-like situation of Māori.

As the book also shows, refugees and asylum seekers from overseas have not been the country's only refugees. War, land confiscations and European settlement had made refugees of Māori in the nineteenth and early twentieth century, with displacement and land loss contributing to subsequent Māori social and economic deprivation.

ANN BEAGLEHOLE was born in Hungary and came to New Zealand with her parents in 1956 after the Hungarian uprising against the Soviet Union. Her publications include A Small Price to Pay and Facing the Past (Allen and Unwin, 1988, 1990), about refugees from Nazism settling in New Zealand.