Essays on Science and Philosophy 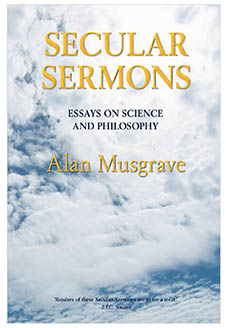 Can we decide what to believe? Why do scientists do experiments and what can their experiments show? Is evolution a scientific theory? Such apparently simple questions are brilliantly investigated by Musgrave in order to interrogate the worldviews we inhabit – and their consequences. He brings to these questions an expansive historical knowledge, provoking his readers to enter the now-discredited belief-systems of earlier ages in order to compare these with their own.

"Secular Sermons is a keeper ... As a science student, teacher and researcher I appreciate this book as the most accessible introduction to the history and philosophy of science I've ever read, and as a source of encouragement and inspiration in my work. But enough about me. Now, go out and get yourself a copy.' – Critic, No. 28, October 2009

ALAN MUSGRAVE (b. 1940) has been Professor of Philosophy at the University of Otago since 1970. He was educated at the London School of Economics, where his PhD was supervised by Sir Karl Popper. With Imre Lakatos, he edited Criticism and the Growth of Knowledge (1970), one of the most influential collections of essays in twentieth-century philosophy of science. His other publications include Common Sense, Science and Scepticism (1993) and Essays on Realism and Rationalism (1999). His views were recently the subject of a book Rationality and Reality: Conversations with Alan Musgrave (2006).