Stunning debut of the
repairing of a life 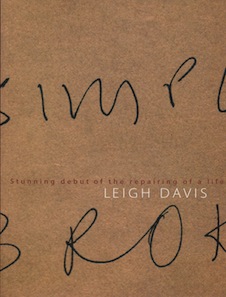 SIMPLE BROKEN BEAUTIFUL is the title on a notebook of poetry written by Leigh Davis in 2008. This was during radiotherapy treatment following surgery for a brain tumour, which was affecting his ability to express himself in words. The notebook writing was the beginning of a work that developed into a long poem called 'Stunning debut of the repairing of a life'. The resulting manuscript won The Kathleen Grattan Award for Poetry 2009, judged by Ian Wedde.

LEIGH DAVIS (1955–2009) was born in Wanganui and completed an MA Hons in English at Auckland University. Further study at Victoria University led to a career in business and the founding of his private equity firm Jump Capital. His writing career got off to a dramatic start in 1983 when he co-edited the highly innovative magazine AND with Alex Calder and Roger Horrocks, founded Jack Books, and published his first volume of poetry, Willy's Gazette, which won Best First Book of Poetry in the New Zealand Book Awards. As a poet, Davis went on to create a series of book-length works that were ambitious and innovative, with an unusual physical form that was an extension of their content. He was increasingly involved in collaborations with other artists. In the late 1990s, he produced a major visual installation, 'Station of Earth-Bound Ghosts', and published a related book Te Tangi a te Matuhi. In 2000 came a collection of poetry and visual art, General Motors, that is available as both a physical and a virtual book on the www.jackbooks.com website. A trilogy, The Book of Hours, followed in 2001, also published as a physical and virtual book. Anarchy, a multi-media text presented in 2006 at the Starkwhite Gallery, was later developed as a book under the title of Nameless (forthcoming). A Trustee of the Arts Foundation, Leigh Davis maintained strong interests in literature and the visual arts. He also gave talks, wrote essays and published widely as a critic.