The Joy of a Ming Vase 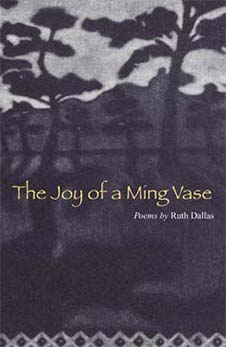 'a beautifully produced volume by one of New Zealand's poetry doyennes ... varied and a satisfying read'
– World Literature in Review

As American critic Tom Disch quipped of many vintage poets: 'friends and pets die, the garden takes on a new significance'. There are poems in this collection about Dutch Masters, the remembered voice of a deceased soprano, a waterfall, ancient Chinese artefacts, victims of the World Wars, kites and flowers; but each piece is sensitively imbued not only with the poet's awareness of impending death but also with the incorrigible fragility of life. While Dallas is at home in a number of different modes, her high regard for literary tradition as a form of spiritual realism makes her eminently readable as a disciplined watcher of the seasons.

I look long at a perfect blue jar
Round as a full moon,
Natural as though self-formed,
And blue as a periwinkle flower.

What is it in perfection
That can move us near to tears?
The jar is singing.

And what are eight centuries,
Time or place,
In communication of this kind,
Mind with mind?

RUTH DALLAS (1919–2008) first published her poems in 1946. She was the author of many volumes and also a noted children's fiction writer. She received many awards, including the New Zealand Book Award for Poetry in 1977, and is much anthologised. Most recent are her Collected Poems (2000) and The Black Horse and Other Stories (2000).