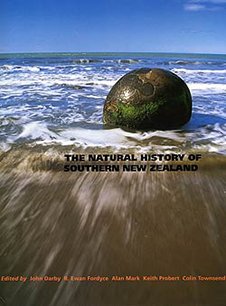 Southern New Zealand is a region of contrasting landscapes and climates, of mountains, lakes, ocean, rivers and fiords, of breathtakingly beautiful scenery and sometimes-strange wildlife.

Bringing together this environment and the scientists who study it, The Natural History of Southern New Zealand is a major new book published by Otago University Press in association with the Otago Museum. Fifty-three authors, most from scientific disciplines and leaders in their specialist fields, combine hundreds of years of collective expertise and research to describe the nature of the region in thirteen chapters.

A publication on the scale of The Natural History of Southern New Zealand happens only once in a lifetime and this book takes the published knowledge of the south's natural history to a new and unprecedented level of richness and detail. The Natural History of Southern New Zealand takes an ecological approach and is more than a catalogue of terrestrial, freshwater and marine species and their habitats. It commences by exploring the origins of the region's rocks and works upwards and outwards, describing not only the species but how they interact with each other and with their environments.

Authors examine geology, landforms, fossils, climate, biogeography, environmental change and the impact of human beings, before moving to a series of habitat-based chapters. Forests and shrublands, tussock grasslands and associated mountainlands, inland waters and wetlands, the coast and the open sea are discussed, and there is a closing chapter on conservation issues. Over 500 illustrations in colour include photographs and drawings.

'The Natural History of Southern New Zealand is a beautifully illustrated account of this story, and it should become a classic.' – New Scientist