His Life and Journeys
by A.C. Bagnall & G.C. Peterson 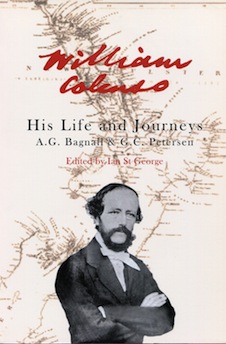 Born in Penzance in 1811, Colenso was perhaps the most interesting of New Zealand's early missionaries. A Church Missionary Society printer, he established the first printing press, was our first printer and printed the first book, 5000 copies of the New Testament in Maori, 365 pages in extent, in 1837. Next came 27,000 copies of the Book of Common Prayer in Maori.

Colenso also printed many pamphlets and documents, including the Treaty of Waitangi. His Authentic and genuine history of the signing of the Treaty of Waitangi (1890) is regarded as the most reliable European account from the time. Throughout his life, he defended the rights and equality of Maori.

Determined to expand the activities of the mission, Colenso undertook major journeys, mainly on the east coast of the North Island. Always an enthusiastic plant collector, his scientific interests were reinforced and made more systematic by the visits of Charles Darwin in 1835, Allan Cunningham in 1838, and Joseph Dalton Hooker in 1841. Botanising accompanied his inland explorations.

Colenso married in 1843 and was ordained as a deacon in 1844, after which he moved his family to the new mission in Hawkes Bay. His career in the Church came to an end when an extramarital affair resulted in the birth of a son in 1851. Some years later, he emerged from the scandal to take up positions first in provincial and later in national politics. At the end of his life, in 1894, he was re-admitted to the Anglican clergy.

William Colenso: His Life and Journeys is the most thoroughly researched and comprehensive biography of this forceful individual, deserving a new edition.

IAN ST GEORGE is a retired general practitioner. He came to Colenso studies through his interest in native orchids. He has edited a collection of Colenso’s letters to the editor entitled Give your Thoughts Life (2011) and Colenso’s Collections (2008). He is editor of eColenso, the newsletter of the Colenso Society.