The Burning of the Emigrant Ship Cospatrick 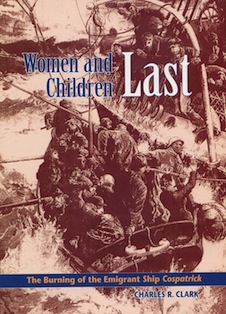 A sea voyage in the nineteenth century was not for the faint-hearted. The hazards were many and accidents commonplace.

Of the ways a ship might meet its end, destruction by fire was perhaps the most feared. Wooden sailing vessels were particularly vulnerable and without breathing apparatus it was next to impossible to fight a fire below decks.

The period saw a number of catastrophic shipboard fires, but that involving the New Zealand-bound emigrant ship Cospatrick was certainly the most destructive. When she burned and sank off the coast of Southern Africa in 1874, nearly 500 people lost their lives. There was a desperate battle to quench the fire, a huge death toll as the vessel was being abandoned, and acts of cannibalism in the one lifeboat that remained afloat.

This book is based on research carried out in Britain, New Zealand and Australia. While it relates the story of the Cospatrick and the nightmare survival of only three people, it also looks at the larger picture of safety at sea.

'Women and Children Last is strikingly well written. Detailed and precise without becoming tedious, wryly witty in places but never inhumane, Dunedin writer Charles R. Clark's prose has a poise and economy many of our fiction writers could learn from.' – Sunday Star Times

CHARLES CLARK began his working life as a merchant seaman in the British Merchant Navy and later became a research chemist, with a doctorate from the University of Stirling, Scotland. He is well equipped for this discussion of safety at sea. As an academic, he is the co-author of 90–100 publications in refereed international chemistry journals and three book chapters. He has worked at the Australian National University and the University of Otago.