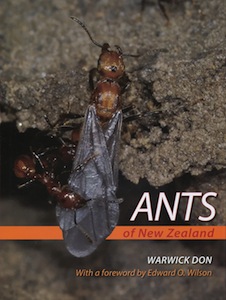 This book is the outcome of a lifetime’s research by the author. He reveals that there are 37 established species of ants in New Zealand, eleven of which are considered to be endemic. This leaves 26 that are exotic or introduced, two of which are recent arrivals. Three of four additional recent arrivals pose serious threats to New Zealand’s invertebrate fauna and economy if they ever become established.

New Zealand’s endemic ant fauna comprises a mixture of ‘primitive’ and ‘advanced’ species. Like spiders, ants can tell us something about New Zealand’s Gondwanan past.

Questions about the identification of ants are frequently fielded by museums. The illustrations and photographs in this volume will greatly assist this task. For would-be students of ants, there is also a useful chapter on collecting and studying the fauna.

WARWICK DON is an honorary curator in entomology, Otago Museum, having retired from the Department of Zoology, University of Otago.

'Don begins with an illustrated key followed by descriptions of all New Zealand species with location maps, photographs, habitats, biology and pest status. There is a fascinating chapter on collecting ants with traps and he describes how to preserve, mount and label specimens.' – Daily Post, Mar 2008

'... the author has produced a work that will become a reference for students and researchers. It is equally as interesting to the casual reader or those who simply want to know more about the country’s smaller critters.' – Waikato Times, June 2008

'Let me add my own praise on Ants of New Zealand. A gorgeous book! It makes me want to go looking for the species depicted.' – Edward O. Wilson, Pelligrino University Research Professor, Harvard University, co-author of The Ants