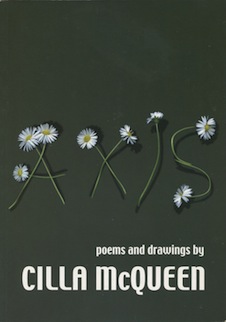 Cilla McQueen is one of New Zealand's major poets (New Zealand Book Award for Poetry three times). Axis is a selection of her poems from the past twenty years, drawn from five volumes of her published work: Homing In (1982), Anti Gravity (1984), Wild Sweets (1986), Benzina (1988), and Crik'ey (1993). The poems are interspersed with drawings she produced on the same themes or subjects. Also included are Cilla's musical scores: of 'singing landscapes' and 'conversations in crowded rooms', for example.

This is an exciting book. It will be welcomed by anyone who enjoys the work of Cilla McQueen.

'... all [McQueen's] best and most loved poems in the one book.' – Raewyn Bright, PPTA News

CILLA McQUEEN has published more than 10 collections of poetry, including The Radio Room (Otago University Press, 2010) and the handprinted letterpress limited edition An Island (Mirrorcity Press, 2014). Her most recent publication is Edwin's Egg and other poetic novellas (Otago University Press, 2015). She has been awarded the NZ Book Award for Poetry three times and held numerous fellowships including the QEII Arts Council's Scholarship in Letters, the University of Otago's Burns Fellowship, a Fulbright Visiting Writers' Fellowship to Stanford University and a Goethe Institut Scholarship to Berlin. She was awarded an honorary doctorate in literature by the University of Otago in 2009. In 2010 she received a Prime Minister's Awards for Literary Achievement (Poetry). She lives in Bluff.