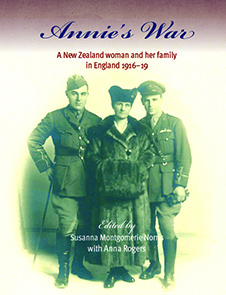 Annie’s War is a remarkable book. There have been many published collections of soldiers’ diaries and letters from the First World War, but never a first-hand account of one New Zealand family’s life in England during these challenging and frightening years.

When her sons, Oswald and Seton, decided they wanted to serve as pilots, which meant enlisting in Britain, Annie Montgomerie decreed that the whole family would go too. So from 1916 to 1919 they lived in London, facing Zeppelin attacks, giving hospitality to young New Zealand friends who left to fight (and sometimes never came back), watching Oswald and Seton go off to war, and suffering in the influenza epidemic.

Through all this Annie kept a diary, in which she recorded her deep love and concern for her family, her hatred of the war, her forthright, amusing and proudly Kiwi views on the English and myriad fascinating details about wartime London life. Annie’s granddaughter, Susanna Montgomerie Norris, has transcribed and edited this extraordinary account, along with many letters and diary excerpts from her pilot father, Seton. Richly illustrated with contemporary photographs and other memorabilia, and superbly annotated by Anna Rogers, Annie’s War offers a unique and compelling view of a crucial time in world history.

SUSANNA MONTGOMERIE NORRIS was born in 1940 and brought up on the family farm, Taukoro, near Wanganui. After secondary education at Samuel Marsden Collegiate in Wellington, she qualified as a teacher and spent two years teaching in London, then travelling in Europe and North America. She later trained as a children’s librarian. After they married, Susanna and her husband, Mike Norris, lived in Kumeu and Kerikeri before returning to Wanganui with their son, Hew. Susanna, who has a lifelong interest in history, especially that of her family, has spent many years transcribing and working on her grandmother Annie’s diaries, which were discovered by her cousin, John Montgomerie. Both have travelled to many of the places it mentions, and John has supplied a large number of the photos used in the book.

ANNA ROGERS has spent most of her working life as a fiction and non-fiction book editor. She is also the author of eight books, including While You're Away: New Zealand Nurses at War 1899–1948 and illustrated histories of the West Coast and Canterbury, and is a regular book reviewer.