The New Zealand kitchen in the 20th century 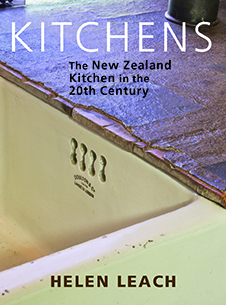 ‘You could say that the 1930s saw the highpoint of Macaroni Cheese.’

This engrossing history of the domestic kitchen covers ten decades that saw our culinary traditions accommodate extraordinary changes in technology and the irresistible process of globalisation. Each chapter surveys the external influences on households and their kitchens, samples the dishes prepared during the decade, and discusses the structure of meals. A study of kitchen equipment and design then closes each chapter, cumulatively revealing more innovation in these aspects than in what we ate.

Kitchens is the culmination of a ten-year research and writing project by anthropologist Helen Leach, supported by the Marsden Fund of the Royal Society of New Zealand, focusing on the material culture of cooking by New Zealanders living in the past two centuries. The project has led to the publication of The Pavlova Story: A Slice of New Zealand's Culinary History (with Mary Browne, 2008; Montana Book Awards 2009 finalist), From Kai to Kiwi Kitchen: New Zealand Culinary Traditions and Cookbooks (2010), The Twelve Cakes of Christmas: An evolutionary history, with recipes (with Mary Browne and Raelene Inglis, 2011), and this book.

HELEN LEACH is Emeritus Professor of Anthropology at the University of Otago. Her research interests include the evolution of human diet and prehistoric horticulture. She has also written two books on garden history, co-authored nine others, and published over 60 articles in journals worldwide.