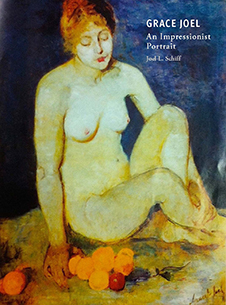 Dunedin-born artist Grace Joel (1865–1924) exhibited to acclaim in London and Paris, yet she and her art are relatively unknown today.

Joel excelled at portraiture and mother and child studies, and was skilled in portraying the nude. She received her artistic training in Melbourne, and lived for the mature years of her career in London, where her work appeared at the prestigious Royal Academy, as well as the Paris Salon and the Royal Scottish Academy. She also held a number of solo exhibitions at prominent venues in Australasian, English and European cities. Today she is claimed by New Zealand, Australia and Britain.

One possible reason why Joel’s work has not remained visible is that few details of her personal life survive. Only three letters have been found, and they reveal little of the person who wrote them. Undaunted, author Joel (no relation) Schiff has pulled together from the words of her contemporaries, various newspaper accounts, scraps in other historical archives and close study of her extant paintings a portrayal of this talented woman that is as intimate and engaging as her work. He also sets Grace Joel and her work in the times in which she lived, and the artistic communities of which she was a part.

JOEL L. SCHIFF was born in Chicago, Illinois, USA and has a PhD in mathematics from the University of California, Los Angeles. He spent his career at the University of Auckland and written three books on various mathematical subjects. He has been a successful part-time asteroid hunter and is the founder/publisher of an international journal on meteorites. Dr Schiff ’s lifelong interest in art has led to him taking up the brush himself in recent years. He first encountered the work of Grace Joel in 1981 at the Auckland City Art Gallery. The interest sparked then never died, and grew to an obsession over the decades. This book on her life and work is the result.