A Place to Go On From

The Collected Poems of Iain Lonie 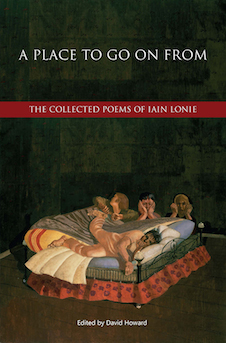 Dunedin poet Iain Lonie (1932–1988), a Cambridge scholar who enjoyed an international reputation as a medical historian, died before his poetry was fully appreciated. He published five slim volumes but his style was not the one that dominated New Zealand poetry at the time. And yet, argues Damian Love in an essay in this volume, ‘To read him now is, for most of us, practically to discover a new resource.’

This collection, assembled from sources public and private, is the result of poet David Howard’s determination to rescue a memorable body of work from oblivion. As well as the poems from Lonie’s published volumes, it includes over a hundred unpublished works, two essays and an extensive commentary.

While his keen interest in mortality was focused by the premature death of his wife Judith (aged 46), Lonie’s poetry is also an attempt to recover the loved in us all. As he eavesdrops on desire and grief he reports back, often wittily, leaving the most poised body of elegiac poetry New Zealand has. For younger poets, Iain Lonie’s poetry has become ‘a place to go on from’.

Iain Lonie’s poems see clearly but never shrug their shoulders. This book is going to be essential.
— Bill Manhire

We cannot overestimate just how much we owe to David Howard for his superb edition of Iain
Lonie’s complete poems. Just as I, for one, cannot sidestep a certain shame at not realising until
now how fine and important a writer Lonie was. He brought to his poetry the precision and
clarity and intellectual force of a gifted classical scholar. He was patiently indifferent to passing
fashions, with his own more enduring touchstones. And in a remarkable fidelity to the tides of his
productive but troubled life, he wrote a body of poems on love and grief and the searing currents
of remembrance that, in New Zealand writing, stands alone.
— Vincent O’Sullivan

I count myself fortunate to have known Iain Lonie as editor and mentor. His fine sensitivity to
poetic syntax and nuance is evident in this collected work.
— Cilla McQueen

Born in Christchurch, David Howard co-founded Takahē magazine (1989), spent 35 years writing The Incomplete Poems (Cold Hub Press, 2011), and collaborated with the artist Peter Ransom on You Look So Pretty When You’re Unfaithful to Me (Holloway Press, 2012). He has received the New Zealand Society of Authors Mid-Career Writers’ Award (2009), the University of South Pacific Poetry Prize (2011), the Robert Burns Fellowship (2013), and the Otago Wallace Residency (2014).