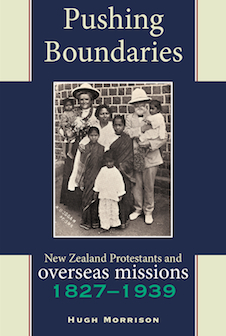 We know a lot about the early missionaries who came to New Zealand from 1814 and how Christianity developed through their complex interactions with Māori. Less well known are the ways in which settler churches of Aotearoa New Zealand reached out to engage in missionary activity in other parts of the world.

Pushing Boundaries is the first book-length attempt to tell the story of the evolution of overseas missionary activity by New Zealand’s Protestant churches from the early nineteenth century up to World War II.

In this thought-provoking book, Hugh Morrison outlines how and why missions became important to colonial churches – the theological and social reasons churches supported missions, how their ideas were shaped, and what motivated individual New Zealanders to leave these shores to devote their lives elsewhere.

Secondly, he connects this local story to some larger historical themes – of gender, culture, empire, childhood and education. This book argues that understanding the overseas missionary activity of Protestant churches and groups can contribute to a more general understanding of how New Zealand has developed as a society and nation.

HUGH MORRISON is a senior lecturer in the College of Education at the University of Otago, where he has taught since 2008 in both initial teacher education and education studies programmes. Earlier he has variously been a high school teacher, youth worker and a contract history lecturer at the University of Waikato (where he is a research associate in the history programme). His research and writing has revolved around the comparative history of religion, missions and childhood across British world settings.