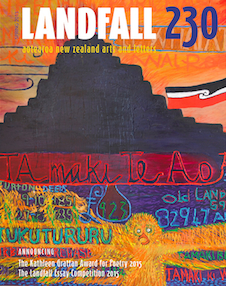 Landfall is a place, a mythic place, a piece of valuable cultural estate, consistently representing over time the robust heritage of Aotearoa New Zealand arts and letters.

Landfall 230 maintains the momentum, keeps the flag flying, and acts as a compass to home ground. The cover signals a turn to geopolitics and Māori land rights revisited, with Emily Karaka’s colourful landscape painting of Tāmaki Makaurau-Auckland as disputed territory, while inside, Landfall 230 proves to be a strongly multicultural issue, reflecting the diversity and energy of contemporary New Zealand writing, with contributions by, among others, writers of Mexican, Samoan, Rotuman, Chinese, Irish and Indian backgrounds.

There’s a satirical parody on the Great New Zealand Novel, and writer Jack Ross provides a comic take on the Auckland avant-garde, while poet and playwright Murray Edmond remembers the 1970s musical ‘happenings’ associated with the composer Jack Body.

Artwork includes a significant series of just-completed small oil paintings by Jeffrey Harris, a senior figure in New Zealand art, along with a series of 2015 paintings by Emily Karaka, and graphic art in black and white by artists Nicole Page-Smith and Philip Madill.

Emma Neale, judge of the 2015 Kathleen Grattan Poetry Award, takes us through the difficult process of choosing a winner; and there is a showcase selection of the four best essays from the 2015 Landfall Essay Competition – eloquent, passionate, exhilarating non- fiction delivered by Tracey Slaughter, Philip Braithwaite, Louise Wallace and Therese Lloyd.

Celebrating the power of the literary imagination with inside stories and true confessions, short fictions and thoughtful critiques, Landfall 230 is testament to the rich variety and dynamism of the current state of New Zealand culture.

DAVID EGGLETON is a prolific poet, writer and critic. His many awards include six times Book Reviewer of the Year in the Montana New Zealand Book Awards, PEN Best First Book of Poetry in 1987 and the Robert Burns Fellowship.