Mothers’ Darlings of the
South Pacific

The children of indigenous women and US servicemen,
World War II 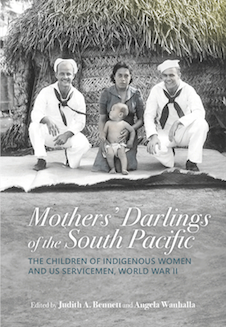 Like a human tsunami, World War II brought two million American servicemen to the South Pacific where they left a human legacy of some thousands of children. Mothers’ Darlings of the South Pacific traces the intimate relationships that existed in the wartime Pacific between US servicemen and indigenous women, and considers the fate of the resulting children.

The American military command carefully managed such intimate relationships, applying US immigration law based on race to prevent marriage ‘across the colour line’. For indigenous women and their American servicemen sweethearts, legal marriage was impossible, giving rise to a generation of children known as ‘GI babies’.

Among these Pacific war children, one thing common to almost all is the longing to know more about their American father. Mothers’ Darlings of the South Pacific traces these children’s stories of loss, emotion, longing and identity, and of lives lived in the shadow of global war. It considers the way these relationships developed in the major US bases of the South Pacific Command from Bora Bora in the east across to Solomon Islands in the west, and from the Gilbert Islands in the north to New Zealand.

The writers interviewed many of the children of the Americans and some of the few surviving mothers, as well as others who recalled the wartime presence in their islands. Oral histories reveal what the records of colonial governments and the military largely have ignored, providing a perspective on the effects of the US occupation that until now has been disregarded by historians of the Pacific war.

JUDITH BENNETT is a professor of history at the University of Otago. Her research interests are Pacific history, environmental history and Australia’s and New Zealand’s relations with the Pacific Islands. With Tim Bayliss-Smith, Judy edited An Otago Storeman in Solomon Islands: The diary of William Crossan, copra trader, 1885–86 (ANU, 2012). More recently she edited Oceanian Journeys and Sojourns: Home thoughts abroad (OUP, 2015).

ANGELA WANHALLA is a professor of history at the University of Otago. Her Matters of the Heart: A history of interracial marriage in New Zealand (AUP, 2013), won the Ernest Scott Prize in 2014. More recently she co-edited (with Annabel Cooper and Lachy Paterson) The Lives of Colonial Objects (OUP, 2015).