Nothing for it but to Sing 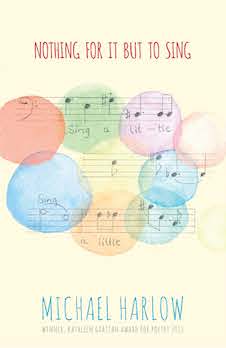 Michael Harlow’s poems are small detonations that release deeply complex stories of psychological separations and attractions, of memory and desire. Frequently they slip into the alluring spaces just at the edges of language, dream and gesture, as they carefully lower, like measuring gauges, into the ineffable: intimations of mortality, the slippery nature of identity, longing, fear ...

Harlow is a poet with such a command of music, the dart and turn of movement in language, that he can get away with words that make us squirm in apprentice workshops or bad pop songs – heart, soul – and make them seem newly shone and psychically right. The work is sequined by sound, rather than running its meaning along the rigid rails of metre and end rhyme. The sway and surge of various meanings in the phrasing, and the way sense trails and winds over line breaks: this movement itself often evokes the alternating dark and electric energy of feelings like love, loss and the pain of absence.

This is a beautifully honed new collection.

MICHAEL HARLOW has published 10 books of poetry, and was poetry editor for Landfall for some 10 years. He has judged New Zealand and international poetry competitions, and selection panels including New Zealand book awards in 1986 and 2001. In 2016 he was awarded the PSNZ/Beatson Fellowship Award, and the Kathleen Grattan Poetry Award. Two years earlier he received the Lauris Edmond Memorial Award for Distinguished Contributions to Poetry. Michael has represented New Zealand/Oceania at many international literary festivals. His work has been translated into French, Italian, Greek, Spanish, German and Romanian.