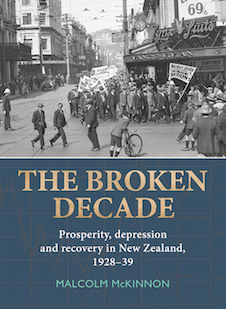 The Depression of the 1930s was a defining period in New Zealand history. It had its own vocabulary – swaggers and sugarbags, relief work and sustenance, the Queen Street riots and special constables – that was all too familiar to those who lived through that tumultuous decade.

But one generation’s reality is another’s history. The desperate struggles experienced by many for work, food and shelter during the 1930s eventually gave way to the sunny postwar years, when the Depression was no more than an uncomfortable memory. And now, for the children of the twenty-first century, it’s just a word.

While the lives of those most affected by the Depression have been admirably documented in oral histories in various forms, the political and economic context, and the manoeuvrings and responses to the unprecedented conditions have not, until now, been given the extensive analysis they deserve.

The Broken Decade, Malcolm McKinnon’s detailed and absorbing history of this period, unpicks the Depression year by year. It begins by introducing the prosperous world of New Zealand in the late 1920s before focusing on the sudden onset of the Depression in 1930–31, the catastrophic months that followed and, finally, on the attempt to find a way back to that pre-Depression prosperity.

Informed by exhaustive research, relevant statistics and fascinating personal accounts, and made accessible and meaningful by insightful analysis, this important book will become New Zealand’s definitive study of the 1930s Depression.

Malcolm McKinnon has had a lifetime career in New Zealand history. He taught for many years at Victoria University of Wellington and has also worked on a number of government-sponsored historical projects. He was the general editor of the award-winning New Zealand Historical Atlas (1997). His own authored works include Treasury: The New Zealand Treasury 1840–2000 (AUP, 2003) and Asian Cities: Globalization, urbanization and nation-building (2011). He has written extensively for Te Ara, the online encyclopedia of New Zealand, and was a contributor to the Royal Society’s report on the 2013 New Zealand census, Our Futures: Te Pae Tawhiti (2014).