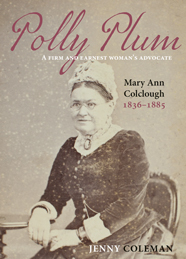 Polly Plum is a biography of one of New Zealand’s earliest feminists, Mary Ann Colclough, whose publicly voiced opinions saw her described in the nineteenth century as ‘our own little stray strap of a modern female fanatic’.
English-born Mary Ann Barnes came to New Zealand in 1857, and soon gained notoriety for her outspokenness on issues relating to women’s position in society. A teacher and also a journalist for the Daily Southern Cross and the Weekly News under the nom de plume ‘Polly Plum’, she also engaged in public debates through the letters to the editor columns, undeterred by becoming ‘the best abused woman in New Zealand in the present day’.
In this fine biography, Jenny Coleman argues that Mary Ann Colclough’s contribution to the women’s movement in nineteenth-century New Zealand is at least equal to that of Kate Sheppard. A good two decades ahead of the organised women’s movement, ‘Polly Plum’ began politicising women by writing about the realities of their daily lives, what needed to change and how.
Coleman here reclaims Mary Ann Colclough’s place in New Zealand’s feminist history by bringing her life and contributions to a wider audience.

Jenny Coleman is a senior lecturer and Director of Academic Programmes in the College of Humanities and Social Sciences at Massey University. She was head of the Women’s Studies Programme at Massey 2000–11 and coordinating editor of the Women’s Studies Journal 2004–09. She has published articles on a range of nineteenth-century New Zealand women’s history topics, and published Mad or Bad? The life and exploits of Amy Bock 1859–1943 through Otago University Press in 2010.

‘Jenny Coleman’s biography is thorough and enlightening. We get a real sense of the character of Mary Ann Colclough … [she] and other women like her deserve to be better known.’
– Jeni Curtis, takahē, April 2018

‘Coleman has done a remarkable job of piecing together a life story from scanty materials … a remarkably coherent and readable narrative.’ – North & South, September 2017