Casting Off: a memoir 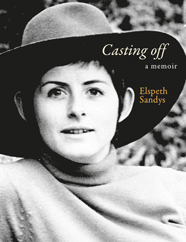 At the end of the first volume of Elspeth Sandys’ absorbing memoir, What Lies Beneath, an adult Elspeth has solved the riddle of her birth parents and begun to piece together the events of her early life and find her place in the world. Casting Off begins on the eve of Elspeth’s first marriage. She and her husband will soon depart New Zealand for England, joining a throng of Kiwis who chose to uproot themselves from their native land.

New attachments will be formed: new loves – of people; of places – will take the place of the old. But the home country will continue to exercise a pull. Backgrounding the personal story in this deeply satisfying memoir is the story of the Thatcher years and the creeping virus of neo-liberalism, the sexual revolution of the sixties, the beguiling world of books – reading and writing – and theatre. Elspeth Sandys’ refreshing honesty and her skill as a writer of fiction and drama propel the reader through an absorbing life story that is equally a commentary on the meaning of memoir and the peculiarities of memory.

Elspeth Sandys has published nine novels, two collections of short stories as well as What Lies Beneath, the earlier volume of this memoir. She has also written numerous original plays
and adaptations for the BBC and RNZ, and scripts for film and television. She has held several residencies and won many awards, including the Elena Garro PEN International Prize for an unpublished short story collection (2005). Her novel River Lines was long-listed for the Orange Prize. In 2006 Elspeth was awarded the ONZM for Services to Literature. Elspeth has two children and six grandchildren. Having lived for over 20 years in Britain she now calls Wellington home.

‘Sandys paints a poignant and honest story of a life so far … she tells it all in a manner that is at once engaging and inspiring.’
– Jessie Neilson, Otago Daily Times, 28 October 2017