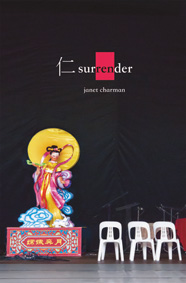 what did you eat
willful Chang’e?
– fly to the moon
where no one hears you
rabbiting on

As one of eight writers, poet Janet Charman was invited in 2009 to take part in a hectic, immersive literary residency in Hong Kong. Written out of this time of stimulating buzz, 仁 surrender chronicles the tensions, translations and literary crushes that ensue, with ever-present comedy.

From this intense hothouse and these privileged constraints flow narrative poems that capture the creative and cultural dislocation of travel, with its petty irritants and constant surprises.

Charman’s verse has always been distinguished by a combination of astute observation, compassion, pluck, vulnerability and willingness to poke fun at herself. – Iain Sharp

In her laconic and original style, Janet Charman writes a body of work which sees [her] exploiting the motif of journeying to investigate the colonised land, past and present. – Siobhan Harvey

The author of many books of poetry, including At the White Coast (2012) and the award-winning Cold Snack (2007), Janet Charman is one of New Zealand’s sharpest and most subversive writers. She lives in Auckland with her partner and daughters.