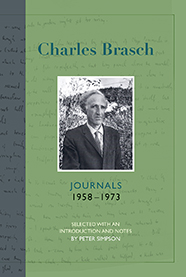 Selected with an introduction and notes by Peter Simpson

This third and final volume of Charles Brasch’s compelling private journals covers the years from when he was 48 to his death at 64. By the 1960s, Brasch, though very private by temperament, was a reluctant public figure, especially as editor of Landfall – indisputably New Zealand’s leading cultural quarterly (he eventually quit as editor after 20 years). He was also becoming a highly regarded poet, who eventually had six books (one posthumous) to his name. Behind the scenes Brasch was increasingly important as an art collector and as patron and benefactor; the Burns, Hodgkins and Mozart Fellowships – for writers, artists and composers respectively – which he helped anonymously to found and fund, all began in this period.

Among his friends Brasch counted most of the country’s leading artists, writers and intellectuals including Sargeson, McCahon, McCormick, Stead, the Pauls, the Woollastons, the Baxters, Lilburn, Beaglehole, Angus, Oliver, Bensemann, Lusk, Frame and Dallas. These near contemporaries were joined by the talented young, many met as contributors to Landfall
– including Gee, Cross, Shadbolt, Duggan, O’Sullivan, Hotere, Tuwhare, Caselberg, Middleton and Manhire. Brasch’s lively and sometimes acerbic accounts of such people are a fascinating aspect of his journals.

Behind the esteemed poet, editor and public intellectual, however, was a sensitive and often angst-ridden man, who confided to his journals (and poems) the emotional roller-coaster of his private life, especially his endlessly frustrated search for love. Presented here are deep attachments to both men and women, including Andrew Packard (a visiting English zoologist) and Margaret Scott, widow of Harry Scott with whom Brasch had also been in love. Late in life his strong involvement with an elderly Jewish émigrée, Moli Zimmerman, adds another surprising layer to the complex and lovable man his journals reveal.

Brasch’s journals will change forever the perception and understanding of an outstanding New Zealander and of the era to which he contributed so much.

Peter Simpson is a writer, editor and curator who has taught at universities in New Zealand and Canada. He was director of the Holloway Press and a head of English at the University of Auckland, retiring in 2013. Peter has written and edited many books and essays on New Zealand art, literature and cultural history, including titles on Ronald Hugh Morrieson, Allen Curnow, Colin McCahon, Kendrick Smithyman and Leo Bensemann.

Recent projects include Bloomsbury South: the arts in Christchurch 1933–53 (AUP, 2016), and Leo Bensemann & Friends: Portraiture & The Group (2016), an exhibition curated for the New Zealand Portrait Gallery. He lives in Auckland.

‘Reading the journals brings a period and people to life … brings the ordinary into the extraordinary, making for a deeply satisfying experience.’
– Peter Stupples, Otago Daily Times, 21 July 2018