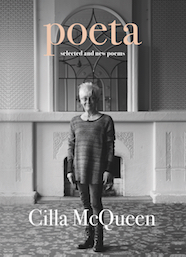 Born in 1949, Bluff-based Cilla McQueen is one of New Zealand’s best-loved poets. Poeta: selected and new poems brings together a definitive selection of her poetry spanning five decades, arranged by the poet in a thematic narrative that elucidates abiding themes while maintaining a loose chronology of her creative life to date.

Of mixed Scottish and English heritage, McQueen is a translocated Hebridean, a spokesperson variously for the southern islands and coast, Rakiura, Fiordland, Murihiku and Dunedin. One of a few indispensable poetic voices of the south, she has long been part of a social matrix of artists, among them Hone Tuwhare, Ralph Hotere and Marilynn Webb, dedicated to bringing out the native brogue and colours of Southland–Otago.
Poeta gathers together poems from the poet’s 14 previous volumes, punctuated by 11 striking drawings, and also includes a range of new work that shows her riddling creativity continuing to grow and evolve. Collectively, the poems demonstrate a versatile and diligent wordsmith never content to sit on her laurels, ever experimenting and improving in her attempt to write the world’s poem.

Poet, teacher and artist CILLA McQUEEN has published 15 collections, three of which have won the New Zealand Book Award for Poetry. Her most recent work is a poetic memoir, In a Slant Light (Otago UP, 2016). Other titles from OUP are Markings, Axis, Soundings, Fire-penny, The Radio Room and Edwin’s Egg. In 2008 Cilla received an Hon. Litt.D. from the University of Otago, and was the New Zealand National Library Poet Laureate 2009–11. In 2010 she received the Prime Minister’s Award for Literary Achievement in Poetry. Cilla lives and works in the southern port of Motupohue, Bluff.

‘There’s a joyful buzz … [McQueen’s] active aesthetic is one that sees poetry mainly as a form of play.’ – Nicholas Reid, Reid’s Reader, 17 September 2018