Unlocking the secrets of a virus 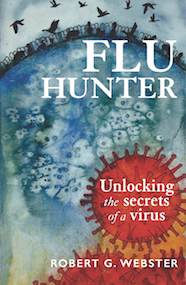 When a new influenza virus emerges that is able to be transmitted between humans, it spreads globally as a pandemic, often with high mortality. Enormous social disruption and substantial economic cost can result.

The 1918 Spanish influenza pandemic was undoubtedly the most devastating influenza pandemic to date, and it has been Dr Robert Webster’s life’s work to figure out how and why. In so doing he has made a remarkable contribution to our understanding of the evolution of influenza viruses and how to control them. A century on, Flu Hunter is a gripping account of the tenacious scientific detective work involved in revealing the secrets of this killer virus.

Dubbed ‘Flu Hunter’ by Smithsonian Magazine in 2006, Dr Webster began his research in the early 1960s with the insight that the natural ecology of most influenza viruses is among wild aquatic birds. Painstaking tracking and testing of thousands of birds eventually led him and the other scientists involved to establish a link between these bird virus ‘reservoirs’ and human influenza pandemics.

Some of this fascinating scientific work involved exhuming bodies of Spanish flu victims from the Arctic permafrost in a search for tissue samples containing genetic material from the virus. Could a global influenza pandemic occur again? Webster’s warning is clear: ‘... it is not only possible, it is just a matter of when.’

Flu Hunter chronicles the career of an outstanding global scientific leader. It is a book that will appeal equally to students and scientists familiar with the field, and lay readers. I heartily commend it to all. – Lance C. Jennings, chair, International Society for Influenza and other Respiratory Diseases

ROBERT G. WEBSTER is a world-renowned virologist and international expert in influenza who was among the first scientists to acknowledge a link between human and avian flu. His team isolated and identified the avian-adapted strain of H5N1, the causative agent of H5N1 flu commonly known as avian influenza or ‘bird flu’. His distinguished career began in Otago. Born in Balclutha, he grew up on a farm before studying microbiology at the University of Otago. He has held many research posts in New Zealand, Australia and the United States. For the past few decades he has worked in infectious diseases at St Jude Children’s Research Hospital in Memphis, Tennessee. He has published over 600 original articles and reviews on influenza viruses, and in his eighties still travels the world addressing conferences and scientific gatherings.