The General and the Nightingale 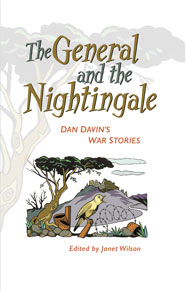 Dan Davin was the author of the only substantial body of war fiction written by a New Zealand soldier during any of the wars of the 20th century in which the nation was engaged. The General and the Nightingale brings together Davin’s 20 war stories, some drawn from his war diaries and loosely based on his experiences as ‘a wartime scholar-soldier’ and those of his fellow soldiers in the British and New Zealand armies.

They yield an unparalleled insight into the Kiwi or Anzac soldier at war during the Mediterranean and African desert campaigns of World War II. Editor Janet Wilson notes they can be read as ‘fictionalised accounts rather than imaginative fictions’.

Born and raised in a working-class Catholic family in Southland, Davin was a Rhodes Scholar and had recently completed a degree at Oxford when he enlisted in the British Army in 1939. After receiving a commission in 1940 he successfully applied to be transferred to the New Zealand forces. He saw active service in Greece and North Africa, was wounded in Crete, and rose to become General Freyberg’s intelligence officer in the Italian campaign.

The General and the Nightingale updates an earlier collection of Davin’s war stories published in 1986 as The Salamander and the Fire and long out of print. This new publication features comprehensive notes, a glossary, a chronology, a map of story locations, a bibliography and an extensive introduction by Janet Wilson. It is a companion volume to The Gorse Blooms Pale: Dan Davin’s Southland short stories (OUP, 2007), which is also being reissued.

DAN DAVIN was a New Zealand Rhodes Scholar who became Academic Publisher at the Clarendon Press in Oxford. Throughout his career, in his spare time, he wrote both fiction and works of memoir, from his war novel For the Rest of Their Lives (1947) and Southland novels Roads from Home (1949) and No Remittance (1959) to his collection of war stories The Salamander and the Fire (1986).

JANET WILSON is Professor of English and Postcolonial Studies at the University of Northampton, UK, and formerly taught at the University of Otago. She has published
widely on New Zealand postcolonial/diaspora writers such as Dan Davin, Fleur Adcock and Katherine Mansfield, and has an interest in globalization and the short story and cosmopolitan war fictions. She recently coedited Katherine Mansfield: New directions (2019). She edits the Journal of Postcolonial Writing and convenes the AHRC-funded Diaspora Screen Media Network.