A window into Miocene Zealandia 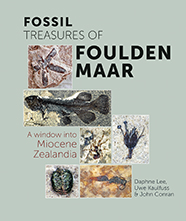 A paleontological site of international significance, Foulden Maar in Otago, New Zealand is home to an amazing record of life on Earth. Formed by a volcanic eruption 23 million years ago, the Maar’s undisturbed sedimentary layers are the resting places for countless rare, well-preserved fossils. The site is unsurpassed in the Southern Hemisphere as a scientific record of changing life and ecosystems at the beginning of the Miocene.

In recent years, the fossil treasures of Foulden Maar have been threatened by a proposal to mine the site’s rich diatomite deposits. Local and national scientific researchers rallied to call for the protection of this unique location, sparking an international debate about the importance of the preservation of paleontological sites worldwide.

In Fossil Treasures of Foulden Maar, authors Daphne Lee, Uwe Kaulfuss and John Conran share their passion and knowledge for this extraordinary spot. They tell the story of the site and reveal the paleontological discoveries that have been made to date. Their book demonstrates the educational and scientific importance of Foulden Maar, paying tribute to the scientific researchers who have helped bring Foulden Maar’s scientific marvels to the surface and who continue to fight for its preservation. Richly illustrated with beautifully detailed images, this volume captures the science, the mystery and the beauty of this astonishing place.

'This fascinating book is like no other I have read. It’s deeply scientific in several fields, yet clearly written for the interested lay person. Lavishly illustrated, it has exquisite whole-page spreads of entire flowers, galaxiids and arthropods, showing exceptional preservation, including even the soft tissue details. I predict all who read it will endorse its final message: ‘Foulden Maar must be preserved’.' – Emeritus Professor Sir Alan Mark, FRSNZ

Daphne Lee has been a coordinator of the research team at Foulden Maar since 2003. She is an Honorary Associate Professor in the Geology Department at the University of Otago. In 2017, Daphne received the McKay Hammer from the Geoscience Society of New Zealand, the premier award for geological research in New Zealand.

Uwe Kaulfuss completed a PhD focusing on the sedimentology and palaeontology of Foulden Maar. In 2009, he received the Harold Wellman Prize for the discovery of fossil insects at Foulden Maar. Uwe is based at the University of Göttingen, Germany, working on the biogeography and evolution of New Zealand fossil insects, funded by the German Research Foundation.

John Conran is a botanist and paleobotanist who joined the Foulden Maar research group in 2006. He has co-supervised several University of Otago postgraduate student projects on aspects of Foulden Maar flora. John is currently based at the University of Adelaide.