How will you be affected by the Operations Group’s priorities this year? In the first of a two-part series, find out how the group aims to provide support through its goals for the University’s buildings and campuses. 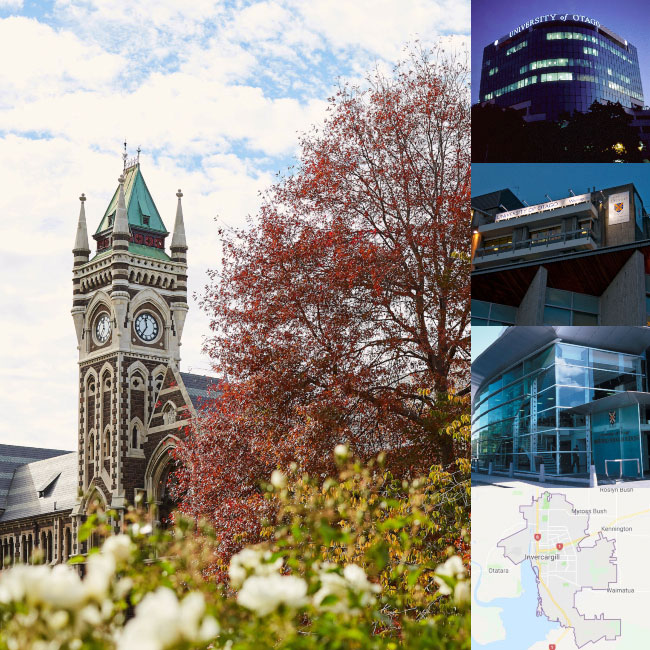 The Operations Groups looks after the University of Otago in (clockwise from left) Dunedin, Auckland, Wellington, Christchurch and Invercargill.

Helping divisions to pin down forecasts for their future and what support they need to achieve those visions are among the priorities for the University of Otago’s Operations Group this year.

It also aims to have produced a preliminary design for the planned new building in Oxford Terrace in Christchurch that can gain approval from the University Council, and to investigate redeveloping Dunedin’s Information Services Building Link and Union Hall.

These will all be the focus of presentations to the University of Otago Council this year so it can make decisions about whether the work should go ahead or how it should be prioritised, based on the overall University’s needs, Chief Operating Officer Stephen Willis says.

Having forecasts and building plans for every academic division will help the University Council prioritise investment decisions across competing demands and help the Operations Group support the academic divisions in the best way possible, Mr Willis says.

The main drivers for change in Health Sciences and Sciences are:

The University’s residential colleges may need nearly 1000 new bedrooms in the next 20 years – in a possible mix of refurbishments, extensions or new colleges, Mr Willis says.

This forecast need is driven by expected growth in demand, knowing the University needs to keep refreshing and upgrading rooms, and the potential loss of Te Rangi Hiroa College due to the Dunedin Hospital building project.

Options for providing more beds may include developing new colleges along with major refurbishments and extensions to existing colleges, requiring careful consideration of timing and funding.

Information is being gathered now to help inform the University’s decisions about how, where and when it could meet the growth in demand for colleges and University Flats, widely known as Uni Flats.

Having a preliminary design approved for the planned new building in Oxford Terrace – along with final approval for construction – is another priority for the Operations Group this year, Mr Willis says.

The University Council has approved in principal plans to build in Oxford Terrace and majorly refurbish the Riccarton Street building, so a more evolved level of design and costings are being developed for Oxford Terrace.

Once those are both available, they will be presented to the University Council for a final decision on progressing to the final design stages and construction. The Council’s decision is subject to funding being available.

The Link and Union Hall

To enhance shared areas and amenity for students, the Operations Group will investigate options for the Dunedin campus’s Information Services Building Link and Union Hall, as part of the University’s strategic goal of having outstanding campus environments and student experiences.

The aim is to present options to the University Council by the end of this year.

The first interior refurbishment of Dunedin’s landmark historic Clocktower building in more than a decade is starting this year, Mr Willis says.

The building’s interior has significant deferred maintenance, and furnishings that have passed their lifespan.

The project will also involve small alterations to the layout of Clocktower office areas to enhance open plan working environments and – combined with new furniture and layouts that make better use of space – will increase work stations by 33 per cent, from 141 to to 188, he says.

One of the Operations Group’s goals for this year has already been achieved, most of Hayward College was stripped out and rebuilt between students leaving last year and arriving this year.

The new building for New Zealand’s only national centre of dentistry should also be completed in April/May, in Great King Street, behind the Walsh Building, Mr Willis says. Once the building has been completed and handed over, the Faculty of Dentistry will need some time to prepare for clinical use; tasks involving patients.