Editor
University of Otago Bulletin Board 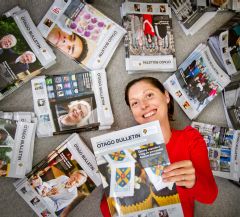 A career in journalism is not the most obvious step to take from a psychology degree, but Lisa Dick says it gave her unique and specialised skills which have helped her when working for some of New Zealand’s top news organisations.

As she neared the end of her combined honours degree in neuroscience and psychology (first class) in the early 2000’s, Lisa wasn’t sure what to do next. She felt a career in research was not where her heart lay, but wasn’t sure what else a science graduate could do.

Then the comments of several of her professors encouraged her to make a leap of faith.

“I had often received comments at the bottom of essays, lab reports and even my honours dissertation that they had been well written. I thought, well, maybe I won’t be a scientist, maybe I can get a job writing about it.”

Lisa applied for, and was accepted to Canterbury University’s highly competitive postgraduate journalism course – one of three science graduates to be accepted that year.

After graduating from the one-year diploma, she returned to Dunedin and worked for two years at local television station Channel 9 (now Dunedin TV) as a news reporter. This gave her the grounding she needed to work first for Radio New Zealand as a general and business reporter, and then for TV3 news.

“I worked alongside some of New Zealand’s top reporters, producers and presenters,” she says. “I interviewed people from prime ministers, to pop stars to sportspeople to scientists. I wasn’t a straight science reporter, but my background in psychology and neuroscience meant I could tackle any of the more difficult health or science stories as they came into the daily run-down.”

“My psychology degree has also helped me in more subtle ways as a journalist. Social psychology ideas like those on group behaviour mean I have a more open mind when reporting on crime, for example. I realise that there are a lot of factors that determine someone’s behaviour.”

Since returning to Dunedin with husband Matt, Lisa has worked as a reporter for the Otago Daily Times and is currently the editor of the University of Otago’s internal staff news website “Bulletin Board”.

“I now have four children, aged between 5 months and 6 years, and I am able to do this job part-time, and from home. It is perfect for a working mum. Journalism is great in that there are these sorts of flexible opportunities. I can interview people by phone and write into the night once the kids are in bed.”

“Also, working for the University means there are always plenty of interesting research stories to write about. Without my psychology degree I might find these intimidating; instead I find them fascinating.”