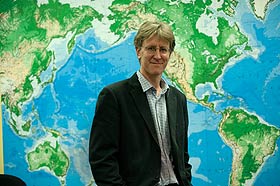 Professor James Higham
“… remote, extreme long-haul destinations like New Zealand will be in the firing line if and when people start thinking twice about travelling so far for a holiday.”

Growing concern about the CO2 emissions associated with long-haul air travel may not stop UK and European tourists coming here, but it might bring about a rethink on how itineraries are planned and the way the experience is marketed.

Higham says tourism contributes about five per cent to global greenhouse gas emissions. “But, of that five per cent, the vast majority is transport and the vast majority of transport is air travel, which means remote, extreme long-haul destinations like New Zealand will be in the firing line if and when people start thinking twice about travelling so far for a holiday.”

Their research focused on two European markets: the UK, which accounts for 285,000 visitors each year, making it our largest longhaul market; and Norway, which is leading the crusade in Europe in terms of political initiatives to reduce CO2 emissions.

“What we found was that the two markets are quite contrasting; however, in both cases, we found that the dream trip to New Zealand is still intact in those markets.”

But, he says, there were significant differences in the way they think about aviation. “UK people are aware of climate change although, when it comes to holidays, they are in denial – they don’t want to compromise their air travel lifestyles. They are very aeromobile and they like flying – both short-haul around Europe with budget airlines and long-haul to places like New Zealand.”

“The tourism industry in New Zealand is facing times of change – and must be responsive to change. It also has a responsibility to mitigating human contributions to climate change.”

Higham uses the term “hypermobility” to describe the way people will head from the UK to the Costa Brava for a game of golf, to Barcelona for a game of football or to Rome for a concert. He goes as far as characterising air travel as an addiction, given that UK people see the holiday as untouchable and something they will not give up easily.

By contrast, there was no evidence of denial in Norway, just genuine concern and first-hand acknowledgement and experience of climate change in action.

“The interesting thing is that, in the case of Norway, they implicate tourism in terms of human contributions to climate change, but, particularly, short-haul budget air travel which is seen to be completely unsustainable. So the dream trip to New Zealand is still intact, but regular, short-haul air travel within Europe is, for the time being, where their concerns are greatest.”

That said, Norwegian people indicated that the way they think about long-haul destinations is changing.

If they were to travel to New Zealand it would be for longer periods and perhaps be linked with study or work experience, rather than just holidaying. Others said they would opt for a longer itinerary, perhaps including Australia or the Pacific islands.

“The tourism industry in New Zealand is facing times of change – and must be responsive to change. It also has a responsibility to mitigating human contributions to climate change,” says Higham.

“Maybe, in the not too distant future, we need to see Australia as a collaborator, rather than as a rival destination, such that the two are marketed collectively, rather than competitively. Simultaneously, Australia is likely to continue to grow as an inbound tourism market given that Australians produce a fraction of the CO2 emissions produced by European visitors travelling to New Zealand. The relationship with Australia will continue to grow in importance.”

“As a long-haul destination, and in times of carbon constraints, it is more critical than ever that the industry pursues the highest standards of environmental sustainability with a single-minded focus.”