An abuse of trusts? 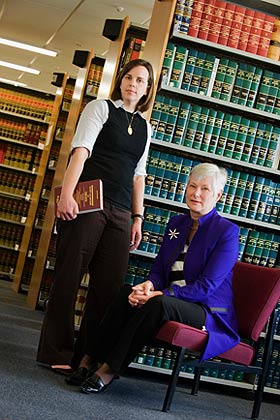 Professor Nicola Peart (seated) and Jessica Palmer
"Ignorance about trusts is incredibly high and that's why we are seeing an increasing number of claims against trustees by disgruntled beneficiaries ..."

Apparent widespread abuse of trusts of all kinds – be they family, trading or charitable trusts – has prompted the Faculty of Law's Professor Nicola Peart and Jessica Palmer to undertake in-depth research into their legal basis.

Palmer says family trusts are an obvious example. Many have been created because people think that is what they should do to protect their family property. "Most of the time they don't have anyone to protect their property from, but they just do it anyway," she says. "But they continue to treat the property as their own, as though nothing's changed, without appreciating that a trust does change everything in terms of who now owns it and who may benefit from it.

Peart says that trusts, because of their amazing flexibility, are used everywhere so, as well as family trusts, there are trading/commercial trusts and charitable trusts. Just how many there are is unclear because, unlike companies, there is no general register of trusts, and the IRD doesn't know because many family trusts hold only non-income earning assets, such as homes.

"Estimates put the number between 400,000 and 500,000 trusts nationwide in a population of just four million. So any legislative reform is going to have widespread ramifications," she says.

"Ignorance about trusts is incredibly high and that's why we are seeing an increasing number of claims against trustees by disgruntled beneficiaries who don't get what they feel they are entitled to because people treat the property as their own and ignore the other beneficiaries."

Trusts have also been challenged, in some cases, because they were not being run properly and it was not apparent to creditors that they had been dealing with a trust. Palmer says it has raised detailed legal questions, such as how do you prove if a trust is a sham or a farce, and what are the rights of creditors and beneficiaries? To answer such questions they will examine fundamental issues such as what is a trust, why do we need them, what are the requirements for a trust and should trusts ever be busted?

They will feed their findings into a Law Commission review of trust law.