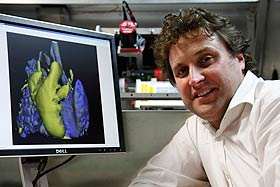 Dr Anthony Butler
"This has huge advantages in interpretation of medical imagery and will lead to better diagnosis of conditions such as breast cancer and vascular disease."

For decades, images from x-rays and scanners have been in black and white, at times limiting clinical diagnosis. But this is now changing with the development, in Christchurch, of the world's first colour CT scanner for medical imaging.

Working in the basement of the University's Christchurch campus, a research team led by radiologist Dr Anthony Butler has constructed a worldbeating piece of equipment, in which even the United States' prestigious Mayo Clinic is interested.

The revolutionary Medipix All Resolutions System – or MARS-CT scanner – is now into successful second-phase development after two years of investigation, and funding has been boosted for the next six years by the Foundation for Research, Science and Technology and the Tertiary Education Commission.

It's understandable, then, that Butler is excited by the project, both in engineering terms and in relation to its future clinical applications. "This is like moving from black and white photos to colour. What's so exciting and new is that this scanner has the capability of picking up high, medium and low energy – the X-ray equivalents of red, green and blue light," he explains. "This has huge advantages in interpretation of medical imagery and will lead to better diagnosis of conditions such as breast cancer and vascular disease." The technology, too, is exciting, particularly for Butler, who has degrees in engineering and physics, as well as radiology. He and his 25-strong team are working with the same chip technology as the European Organisation for Nuclear Research (CERN) and its Large Hadron Collider, the huge particle physics experiment now being carried out beneath the Swiss- French border: the CERN Medipix silicon pixel chip – high-energy physics translating into better health care.

The MARS-CT project involves other University of Otago staff: radiologists Professor Tim Buckenham and Dr Nigel Anderson, Dr Nick Cook (Canterbury District Health Board Medical Physics and Bioengineering) and colleagues from the University of Canterbury's Engineering and Physics Departments. Most recently, they have also been collaborating with the Christchurch Cardioendocrine Research Group which focuses on heart disease and heart failure.

So far, the new scanner has been used on tissue samples from mice and some vascular tissue. The next step is to develop its efficacy with breast cancer to test if the colour images can better distinguish normal and malignant tissue; then to develop further its application examining vascular plaque in atherosclerosis.

Butler says, internationally there is significant clinical and commercial interest in the development of colour CT scanners because they offer the possibility of capturing more detailed information about a disease. "The areas where we think it will be most useful will be in vascular imaging, such as heart disease and in the brain, because you can pick up contrast agents so well, and differentiate calcium and iodine more easily," he says.

"We also think it will be faster and safer in cancer imaging. For instance, with an adrenal tumour we can get a more useful image all in one scan because it's in colour, rather than needing three different scans under the old black and white system. You also get better soft-tissue contrast so there is more information to look at."

With recent FRST funding, the project will now push on with the research and development required to manufacture MARS-CT colour scanners in New Zealand for clinical use.