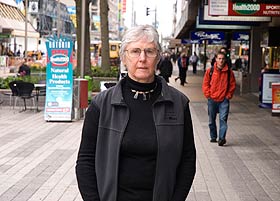 Associate Professor Elisabeth Wells
"We have similar figures for alcohol as other developed Western nations, and our levels of cannabis onset and use are very similar to the US and Australia."

That "onion" is the comprehensive New Zealand Mental Health Survey, which gathered a wide range of data in 2003/04 from more than 12,000 New Zealanders aged 16 and older, in conjunction with the World Health Organisation.

Their research has shown that non-medical drug use in New Zealand is very widespread from teenage years onwards and includes interesting variations based on ethnicity.

The aim of the study was to find out when drugs are first used and the percentage of the population who have used drugs for non-medical purposes.

It was no surprise to find that alcohol was the most commonly used drug in New Zealand, with 94 per cent of the sample having used it at some stage. This finding is echoed in another study by Wells in 2007, showing that one in three young adults had problems arising from their drinking.

"We have similar figures for alcohol as other developed Western nations," Wells says, "and our levels of cannabis onset and use are very similar to the US and Australia.

"However, most developed countries in continental Europe appear to have much lower use of cannabis than New Zealand, with only six to 20 per cent of the population ever having used it." New Zealand differs from some countries in "hard" drug use such as heroin, morphine and cocaine. Only 2.9 per cent of those surveyed in New Zealand say they have ever used opioids, and only 4.2 per cent cocaine. European countries have a lower use of cocaine (1.0-1.9 per cent) except for Spain (4.1 per cent). The US is the country with by far the highest percentage of people who have used cocaine (16.2 per cent), much higher than Colombia or Mexico (4.0 per cent for both).

"The direction of use, according to age, tends to move from alcohol, to 'soft' drugs and then onto 'hard' drugs," says Wells. "Most people first start using alcohol in mid-adolescence and then cannabis a few years later. First use of opioids is more common in the early 20s and then use of cocaine begins in the mid-20s, possibly when people have travelled overseas."

The direction of use, according to age, tends to move from alcohol, to 'soft' drugs and then onto 'hard' drugs.

Ethnicity in relation to non-medical drug use also showed some interesting patterns. Only those born in New Zealand were included in this analysis. Pacific peoples delayed starting alcohol compared with Mäori and the composite "other" ethnic group in the survey. However, most young Pacific peoples had used alcohol by 25 years of age.

Pacific peoples were also less likely to use drugs other than alcohol, compared with Mäori, with the "other" composite ethnic group in the middle range.

Wells says the results of this first national mental health survey in New Zealand are robust because of the very large sample and the relatively high response rate. Its value is that it provides directions to combat drug use and abuse, and points to interventions starting in adolescence, both at a national and regional level.