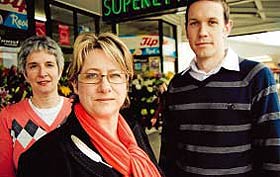 Dr Louise Signal (centre) with students Moira Smith and Mat Walton "Over the last four years we've investigated whether or not our children live in an 'obesogenic' environment. Our findings now show that they do."

New Zealand children live in an environment where unhealthy food is more heavily promoted, more accessible and, for the most part, cheaper than healthy food. That's the conclusion from several studies from the Health Promotion and Policy Research Unit (University of Otago, Wellington).

"Obesity is a serious problem and it's getting worse," says director and lead researcher Dr Louise Signal. "Our research shows that it's a significant health issue that will have huge costs for the public health system in the future from diseases such as diabetes. "Over the last four years we've investigated whether or not our children live in an 'obesogenic' environment – one that encourages them to become obese. Our research findings now show that they do."

Signal and her colleagues believe there is enough evidence to act to improve children's food environment. The research suggests advertising and marketing restrictions are needed, that zoning by-laws around schools should be considered and that there is an urgent need to ensure that no children go hungry in a food-rich society. These findings are supported by other New Zealand and international research.

Ministry of Health figures show that one in five children under 14 years is now overweight, one in 12 is obese and the rate of obesity for Māori is twice that of European New Zealanders. The World Health Organisation has long identified major links between childhood obesity and chronic diseases in adulthood, and this is accepted by most international public health experts. "What we've done in the New Zealand context is to explore what's encouraging obesity in our children. A key factor appears to be living in an environment that promotes consumption of energy dense, nutrient poor or 'junk' food," says Signal.

Signal's research reveals that, compared to Australia, New Zealand TV channels show a very high proportion of food advertisements that can be classed as "obesogenic". She says the ads promote unhealthy food that is high fat/high sugar, with 70 per cent of food ads counter to improved nutrition.

"A key factor [to obesity in children] appears to be living in an environment that promotes consumption of energy dense, nutrient poor or 'junk' food."

On the same channels only five per cent of advertisements favour improved nutrition. The number of food advertisements per hour on one channel (TV2), mainly watched by younger age groups, increased from eight ads an hour in 1997 to 12 per hour in 2005. This research suggests that New Zealand children are exposed to at least 5,000 television advertisements for unhealthy food every year, if they watch two hours of television a day – and many New Zealand children watch much more.

Sponsorship of sports for young people is another area the Wellington researchers say is dominated by unhealthy products – mainly ads for gambling, alcohol, and "junk" food. The researchers suggest increased regulation to control this sponsorship and to provide alternative funding for these sporting activities.

Signal and her colleagues have also revealed that advertising of "junk" food is more prevalent near secondary schools and is not compatible with nutritional guidelines for adolescents. More than 70 per cent of these ads can be classified as unhealthy. Salad options are less available in lower socio-economic areas and there are more "junk" food outlets closer to these secondary schools.

In a controversial study of a nutritional food – milk – Signal and Moira Smith also revealed the health impacts on children of escalating prices. The study clearly demonstrated that milk prices have increased rapidly in recent years, making access to this basic food increasingly difficult for many families. "This is ironic in a country that produces enough milk each year to feed one hundred million people," says Signal.

She says 17 per cent of New Zealand children do not drink milk at all, 34 per cent drink it weekly and only 38 per cent drink it on a daily basis. At the same time, unhealthy, sugar-laden fizzy drinks are cheaper than milk in most supermarkets.

On a more positive note, Signal says there has been some improvement in the foods available in settings such as schools, under the Ministry of Health's Healthy Eating – Healthy Action Strategy.

"While some interventions have been withdrawn by the incoming government before they could be fully evaluated, the challenge now is to keep policies and resources in place to cement such improvements, and work to improve the availability and promotion of healthy food where children live."

Signal and colleagues are now furthering their investigations into children's food environments by looking at the extent sports settings encourage unhealthy eating. They are particularly interested in the availability and promotion of "junk" food around the two most popular winter sports, rugby and netball.