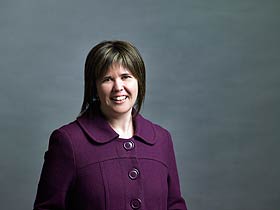 Dr Angela Wanhalla
"What I'm interested in is looking at the diversity of interracial encounters in New Zealand's history through the lens of intimacy."

Dr Angela Wanhalla is a highly-credentialled historian and has a swag of awards to prove she is one of New Zealand's brightest young researchers. In 2008 she was awarded the prestigious Rowheath Trust Award and Carl Smith Medal, and this year received one of the University's Early Career Awards for Distinction in Research.

These awards recognise her work in her field of interest: the histories of cultural encounter in New Zealand's colonial past, specifically gender, race and colonialism in 19th century New Zealand. She is also interested in the indigenous history of the North American west and in the history of intimacy, particularly inter-racial relationships.

The latter is the subject of her most recent work, for which she has received a Marsden Fast-Start grant for a three-year study into the history of inter-racial intimacy in New Zealand from 1769 to 1969.

The project is the first comprehensive, nationwide investigation into this subject and Wanhalla says it attempts to place the national story into the international or broader colonial experience, because inter-racial relationships came out of cross-cultural contacts throughout the world. "I'm interested in the whole range of newcomers, whether they are European, American and African-American or other people that emerge, and out of the different contexts."

The project explores relationships between Māori and the early explorers, sealers and whalers, and those involving missionaries, European settlers, Chinese and subsequent immigrants.

"I'm interested in the tensions that happen when a group of people come into contact with another group of people and end up living within their society. What kind of relationships emerge? What kind of affective ties emerge out of that context, whether that be sexual or other intimacies? "So it [the project] is more than just [about] marriages and investigating people's personal relationships. It's trying to show the political, social and cultural meaning of those relationships."

Wanhalla, a lecturer in the Department of History, and of Kai Tahu and Päkehä descent, says the overall aim of her study is to "look at a path that hasn't been considered; to look at a set of people who don't always emerge in our history books and give them prominence in some way". "What I'm interested in is looking at the diversity of inter-racial encounters in New Zealand's history through the lens of intimacy. "We're talking about inter-racial marriage, formalised relationships, but I'm also expanding [that] to include violent as well as short-term relationships."

One of her main findings thus far is that inter-racial marriage occurred right through the 19th century and throughout the 20th – not just in two main waves, at first contact and post-World War II, when there was a mass migration of Māori from rural to urban areas.

"What's also been revealed by this research, at least prior to the New Zealand Wars of the 1860s, is that many of the concerns about interracial relationships were not just racial ones [expressed by missionaries, the Crown and others], but were about class as well, so it's much more complicated than we think."

Wanhalla notes the state wanted these relationships to be not only "moral", but also legitimate, so it encouraged formal marriages to ensure the children of those relationships were able to inherit land under British law. There was also a strong push for the education of mixed descent children in the British system so they would be loyal to the Crown.

She has also found that sexual violence (rape and sexual assault) took place during the New Zealand Wars of the 1860s, on both sides, something which has not been studied previously. One aspect of this is to see how claims about Māori men violating European women may have been used as further justification for repressive policies against Māori communities.

The project will be included in a book to be published in 2011 with Auckland University Press. Wanhalla is also co-writing a book on the illustrated history of Māori and is involved in a project on the visual history of the assimilation policy in Canada.