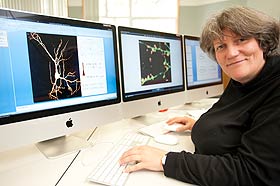 Dr Lubica Benuskova
When tested on brain cells, predictions based on her mathematical models proved to be correct.

Fast, adaptable, and extremely portable - it is the best computer known to man. Able to learn languages, guide vehicles and make complex computations in a split second, there is nothing that can match the versatility of the human brain.

This ability to learn and create memories by making and maintaining vital connections, or synapses, between cells is known as brain plasticity. To understand it better, University of Otago researcher Dr Lubica Benuskova, from the Department of Computer Science, has turned to mathematical modelling and computer simulations.

Benuskova says brain plasticity comes down to cellular connections within the brain being able to strengthen or weaken and to change their efficiency.

"They can multiply or divide in number and we know they atrophy if they are not used.

As with any rules, there are exceptions, so Benuskova, who is working closely with Professor Cliff Abraham, the director of the University of Otago Brain Health and Repair Research Centre, wants to develop more general rules in the form of theoretical mathematical equations to cover as many situations as possible.

Originally from Slovakia, Benuskova has undertaken research in Europe and the United States where she worked with Professor Leon Cooper at Brown University, a Nobel Prize winner in physics who has turned his attention to brain research.

He developed an equation to represent what happens at a cellular level when learning takes place. Benuskova modified the model to include the timing of pre- and post-synaptic activity, taking into account the effects of what happens just before or after a synaptic connection is used. It was about this time that Abraham became aware of her model and saw that it could fit very well with his research into the hippocampus – the part of the brain that plays a critical role in long-term memory formation. That led to a collaboration that eventually brought Benuskova to Otago.

After using the model successfully to reproduce the experimental results of Abraham's hippocampus research, she has taken it a step further and used it to make bold new predictions.

One of the key predictions was that if they stimulated one pathway while they blocked spontaneous activity on a neighbouring neural connection, this would actually prevent the unused pathway or connection from weakening.

The prediction was tested by Abraham's team on living brain cells and proved right. She says the key highlight of the research was the fact that this prediction, which had come completely from a mathematical model, had proved to be correct.

Further model predictions are due to be tested on living brain cells, working in collaboration with Abraham and Dr Peter Jedlicka, from the University of J W Goethe in Frankfurt, while Benuskova does the modelling. She says that understanding the rules of synaptic plasticity, and how neurons make and break their links, will help them understand what goes on with conditions such as Alzheimer's disease.

"We can use these models of what is normal to better understand what is damaged or not normal. Understanding the mechanisms of these diseases better will help in the design of better treatments."

A book on the topic of Computational Neurogenetic Modeling, co-authored by Benuskova and Professor Nikola Kasabov from AUT, has been published recently by Springer, outlining how such models can be taken one step further to include genes.