Textile tests for the real world 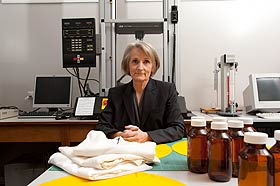 Professor Raechel Laing
“Effective testing of interactions between the human body and clothing is relatively recent..."

What do you wear when you venture into the great outdoors?

Hikers, hunters, sailors and sportspeople all have their own ideas about the best attire for their activities, but what do we really know about the clothes we choose?

Not enough, according to Professor Raechel Laing, of the Department of Clothing and Textile Sciences. For the last decade Laing has been at the forefront of studying how textiles work in the real world, focusing on the physical and physiological interactions between the human body and clothing.

The subject has suffered from a long history of insufficient research and optimistic marketing, says Laing. "Many quite basic issues have never been addressed from a human physiological perspective."

One of the difficulties facing researchers is developing and applying laboratory trials on fabrics that are relevant to users in the real world. A number of recent Otago projects have used scientific thought from several disciplines on the kinds of arguments more often held below a line of steaming socks drying in tramping huts.

Some results provide a clearer understanding of critical variables and support longheld beliefs, but others throw up surprises that lead to new questions.

In a highly controlled and, therefore, rare trial, testing different outdoor skin-layer garments on human participants, Laing and her team measured the performance of polyester (interlock), a polyester/wool blend (plated) and wool (single jersey). Longsleeved upper body garments were matched to the body dimensions of each of 10 trained athletes, whose physiological responses were recorded as they rested, ran and walked in two separate conditions: hot 32±2°C, 20±2%RH; cold 8±2°C, 40±2%RH.

The difficulty of predicting performance from laboratory tests on fibres and fabrics was emphasised when the athletes were recorded as being typically hotter in polyester interlock, a fabric that had tested as being less thermally resistant than the other fabrics. The study showed that, although the effects of garments on wearers are often related to the properties of the fabric, only some differences in fabric properties result in measurable physiological responses of wearers.

Most marketing is based on fibre properties, but it is a huge extrapolation from fibre properties through to finished garments and the way in which they affect the wearers.

"The transformation of fibres to garments involves many steps," says Laing. "They are processed into yarn, to fabric of many possible structures and properties, and the fabrics are finished with several possible treatments.

"Additionally, garments can differ in their dimensional relationship with the body and this difference affects several properties - thermal resistance and compression, for example. "Effective testing of interactions between the human body and clothing is relatively recent and is hampered primarily by limitations in instrumentation and computational accessibility."

Human trials were identified as important a century ago, but then largely ignored as being too difficult and expensive.

"It was much simpler to measure the properties of a piece of fabric in a laboratory and then generalise about how that was going to perform as a garment," says Laing. "Serious investigations were largely limited to life and death situations such as space exploration and workplaces with high risk, but in everyday life and in competitive sport much basic theory was ignored for years."

The method of predicting a garment's properties from lab tests on a new, flat, dry fabric is now generally accepted as having limitations, and has resulted in the development of human mannequins - sweating, moving, life-sized and highly instrumented.

"International collaboration has led to greater standardisation," notes Laing. But when it comes to arguments in tramping huts, there's no substitute for human trials. Laing recently supervised PhD student Rachel McQueen in an investigation of odour intensity retained on apparel fabrics, with particular interest in the fibre and in the fabric structures. The tests involved active participants wearing T-shirts with fabric patches stitched in the armpits for two consecutive working days. The patches were then removed and stored for testing by both microbiologists and sensory analysts.

Odour tests of polyester, cotton and wool fabrics in different knit structures - rib, interlock and single jersey - at intervals of a day, a week and a month showed that lighter, thinner knits retained less odour than heavier ones. Polyester knits retained the most odour and wool the least.

Microbiological tests showed that, after a day, similar counts of odour-producing bacteria were evident on all fabrics. After a month, the number of organisms on the polyester fabric had declined rapidly, but researchers were surprised to find the count remained much the same on the wool fabrics.

It's generally well known that wool doesn't smell as much as other fabrics after being worn for a long time, but the explanation for this is not yet entirely clear, says Laing. "We thought it might be because micro-organisms were not retained on the wool fabric, but this was certainly not supported by the evidence."

Research continues and is eagerly awaited by both industry and consumers. "Increasingly the consumer expects that claims made about a product can be defended," says Laing.

"Performance clothing" is an ill-defined marketing term, she says, and demand for it, especially in competitive sport, is driven largely by the marketers.

"Most marketing is based on fibre properties, but it is a huge extrapolation from fibre properties through to finished garments and the way in which they affect the wearers. "Our interest is in better understanding the interactions between the garment and the human body. This can be achieved only with a multidisciplinary team."