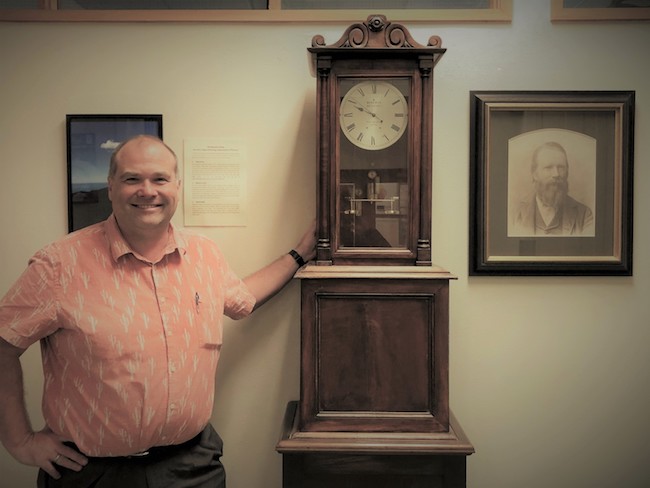 Head of Department of Physics Professor Craig Roger beside Arthur Beverly’s clock constructed in the 1860’s.

Did you know that there’s a clock in the Department of Physics that’s believed to be one of the longest running science experiments in the world?

Constructed by watchmaker and skilled mathematician Arthur Beverly in Dunedin, the clock was first exhibited in the 1865 New Zealand Exhibition hosted in the city. Having never been manually wound, the clock is instead driven by temperature and atmospheric pressure variations.

On Beverly’s death in 1908, not only did the Scotsman bequest the clock to the University, but he also left an estate of £57,000 which since then has funded scholarships, and supported staff and teaching in the Department of Physics.

The ‘Beverly Chair in Physics’ has been associated with the Department since this time, and its honour has recently being conferred to Head of Department Professor Craig Rodger.

Professor Rodger is the fifth professor to hold the title, the inaugural recipient being Professor John Shand who started at Otago in 1870.

Professor Rodger says he received a Beverly scholarship when studying as an undergraduate in the Department.

“Lots of people who received a scholarship went on to do great things, and they proudly mention Beverly’s name as part of their career journey,” he says.

“So to be associated once again with his name is great. It means a lot.”