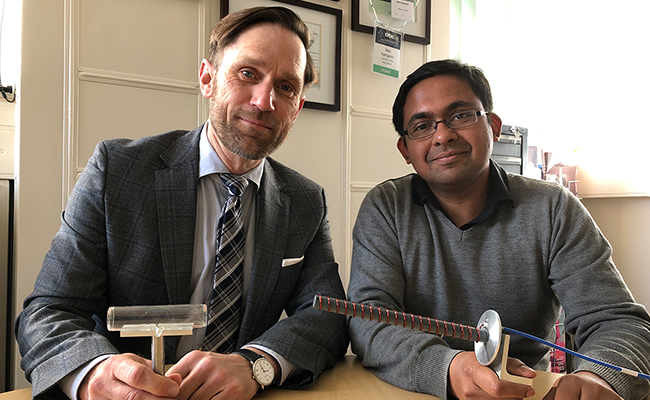 Professor Niels Kjærgaard and Dr Amita Deb hold a vapour cell that houses a gas of atoms and a radio antenna that transmits radio signals - the core components of “Ry-Fi”.

Securing a US patent is no easy task, but a pair of University of Otago physicists have done just that with their world-first quantum radio technology.

Dr Amita Deb and Professor Niels Kjærgaard have been issued a patent for their optical antenna based on Rydberg atoms which can convert data from wireless radio to optical fibre communications without the need for any linking electronics.

Dubbed as “Ry-Fi”, the technology uses atoms to encode wireless data at very high frequencies onto laser light, which means an enormous amount of information can be transmitted.

To put that in perspective, home Wi-Fi transmits data at 2.4 or 5 gigahertz while the “Ry-Fi” can scale up to 100 gigahertz. 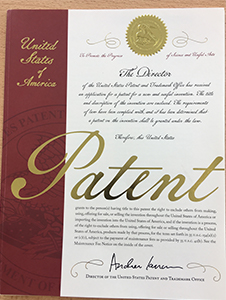 Once inside the optical fibre cable, the information can then travel for thousands of kilometres with very little reduction in signal strength.

The data is also extremely secure, which gives the invention potential applications for the military and security agencies.

The technology uses fundamental quantum mechanics and was developed out of Otago’s ultracold atoms lab.

“You have to really convince the patent examiner that what you've done is novel and not obvious or else the patent is not going to be granted.

“It forces you to focus on what exactly sets it apart, so it's been a fruitful exercise.”

Professor Kjærgaard described the patent as a way of giving the invention an extra layer of credibility.

“It puts a stake in the ground that you are a serious contender.”

"It can be difficult to get a handle on the intricacies of the patent process and Amita and Niels did a fantastic job and their input was absolutely fundamental to having the patent granted.”

Otago Innovation is now working on commercialising the technology.

Otago Innovation Patent Attorney and IP Manager Tomas Ribeiro said the patent process involved some challenging “back and forth” with the US patent examiner, and culminated in a video-conference with the examiner, inventors and our US based patent attorneys.

“The main reason to have a patent is that you can essentially exclude other people from using the technology and that's really attractive to investors, because they don't want to invest money into something that other people have the freedom to use.

“When you have exclusive rights, that's a much more attractive pitch.”