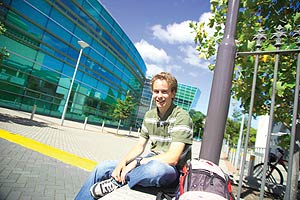 So far Jonathan Broom has studied the psychology of rats, but he hopes to soon understand more about people.

"I thought I'd study Zoology," says Jonathan. "I'd loved biology at school, but after taking a year off before varsity to work, I decided to change tack."

Jonathan admits that it is hard to pinpoint what it was about working at a drycleaners during this period that encouraged him to shift focus from animals to people, but he identifies the options available in Psychology as one factor that attracted him.

"You can major in Psychology as an art or a science," explains Jonathan, "so it can fit your particular interests; I decided I preferred the arts focus. Plus I can minor in Sociology, which fits in nicely - it's another way of looking at human activities."

Now Jonathan is looking forward to the year ahead. "First year was a mixture of great fun and hard work - I learned lots and met tonnes of people. I want to get even more involved in the university lifestyle this year."

Having recently gone flatting, Jonathan should have that opportunity. Does he think sharing a house may also offer some further insights into human behaviour?

"Possibly," Jonathan says, "just so long as the rats stay in the lab!"