Unless you’re a water-polo player, the “egg-beater” technique may mean little to you.

But new research from the University of Otago has found it may be the most effective skill you can learn to prevent drowning. 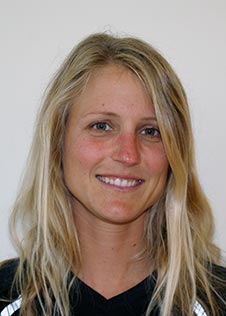 Dr Tina van Duijn, from the University’s School of Physical Education, Sport and Exercise Sciences, says it is important during an emergency to be able to perform a movement in the water that is economic – both energetically and cognitively.

“You should still be able to perform it while in panic, or while assessing the environment, making decisions, or even alerting people who might be able to help you.”

Her new research “A Multidisciplinary Comparison of Different Techniques Among Skilled Water Treaders”, funded by the Swiss National Science Foundation, is the first step in identifying what pattern of water treading is best to prevent drowning.

The study involved monitoring the physical and cognitive demands of four common treading techniques on 21 people experienced in water treading, who were chosen to ensure that all the techniques were performed correctly.

Those techniques are: “running” in the water, “flutter kick” with hands sculling, “upright breaststroke” and the “egg-beater”, where the legs alternate breaststroke kicks.

The swimmers were asked to perform the 4 techniques for 3 minutes each in a swimming flume while their oxygen intake and carbon dioxide production, as well as their heart rate, were monitored.

Cognitive effects were assessed through a test during the first minute of treading, where participants had to verbally respond to cues presented on a screen.

It was the “egg-beater” technique, closely followed by the “upright breaststroke”, that came out on top.

Dr van Duijn says a potential reason for the “egg-beater” being the most economic could be because a different physical force is generated when performing sculling movements, compared to kicking and pushing movements.

“Continuous sculling movements have no recovery phase and generate a lift force, which tends to be more effective.”

However, it is also for that reason she was surprised to find the “upright breaststroke” technique proved almost as good as the “egg-beater”, despite including a recovery phase.

Dr van Duijn says it is possible that the combination of synchronous, lateral kicks with sculling hand movements in “upright breaststroke” was sufficiently economic for this task because participants’ hands were not otherwise occupied.

But if someone needed to lift their hands out of water to grab something or signal for help, she suggested the “egg-beater” would likely be the best solution to stay level.

As for the “running” and “flutter-kick” techniques, they were significantly more physically and mentally demanding.

Dr van Duijn hopes her research will emphasise the importance of teaching water treading techniques that withstand the effects of panic, fatigue and multitasking.

Her study lays the groundwork for future research to establish what the ideal movement to perform in drowning situations is for everyone, and the next step will be to test the techniques on less-experienced swimmers, and in different swimming environments.

“It is often the case that when people are getting caught in rips, or they jump into a lake and it is deeper than they thought, they just kick as fast and as hard as they can.