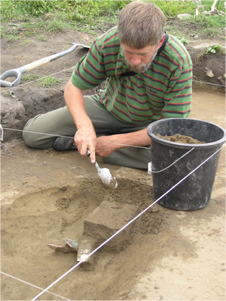 The Māori toolkit was dominated by flaked stone tools, which were replaced in the nineteenth century by iron tools. Māori craft specialists were highly proficient adze makers, and they sourced stone over a wide geographical area. Nevertheless, it is often assumed that the manufacture of stone tools in Aotearoa was a relatively small-scale or household-based activity.

It is now apparent that within a decade or so of arrival in this country, a highly sophisticated and complex stone tool industry had been established. Like the industries of nineteenth century Europe, it was based on the sourcing and transport of raw materials through long-distance networks, the setting up of specialist manufacturing sites, and the redistribution of finished products through national exchange systems.

The mass production of adzes in specialised workshops, and their distribution via maritime transport systems represents New Zealand’s first manufacturing and export industry. It now appears that the exchange systems, around which the early stone tool industry was based, were also intimately tied to the success and viability of the new colony.

The SPAR team is carrying out research on the various stages in the industrial chain of activities that took place at the quarries, primary and secondary production zones, and the networks themselves that define the country's first large-scale industry.