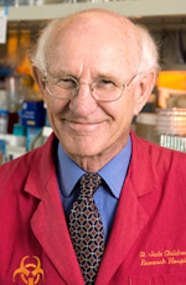 The Webster Centre for Infectious Diseases is named after the family of Robert G and Marjorie Webster. Professor Webster is a noted virologist and international expert in influenza.

Robert Webster was the first to acknowledge a link between human and avian flu. His team isolated and identified the avian-adapted strain of H5N1, the causative agent of H5N1 flu commonly known as 'avian influenza' or 'bird flu'.

He is an expert in the structure and function of influenza proteins and in the development of new vaccines and anti-virals. The reservoir of influenza viruses in wild birds and their role in the evolution of new pandemic strains for humans and lower animals continue to be a focus of his work.

Born in Balclutha, Robert Webster grew up on a farm. He studied at the University of Otago in Microbiology where he completed a BSc and MSc. During his distinguished career he has held many research posts starting out as a virologist with the New Zealand Department of Agriculture. He then became Research Fellow at John Curtin Medical School, Canberra, Australia. After receiving his PhD he moved to the USA.

Professor Robert Webster continues his work in infectious diseases at St Jude Children’s Research Hospital in the USA. He has published over 600 original articles and reviews on influenza viruses. He has also mentored many individuals who have successfully contributed to our knowledge of influenza as an emerging pathogen.
Professor Webster's profile (St Jude Children's Research Hospital website)

Robert and his family established this Chair in Viral Pathogenesis in 2005 in conjunction with the Leading Thinkers campaign. Professor Andy Mercer was appointed to the Chair, and in 2012 he was delighted that Robert and Marjorie were able to be present at his Inaugural Professorial Lecture: Viruses and us—is it all bad news?

Visit our news archive for Professor Webster speaking about his research interests.