Anatomy staff dress up for Frocktober 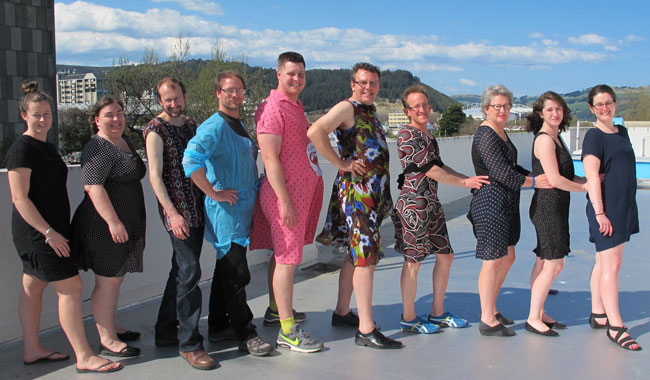 Members of Anatomy's "Reynolds research group" pose in their dresses for Frocktober.

The late Dr Elspeth Gold would be tremendously proud of her colleagues in the Department of Anatomy this month – as men and women alike don dresses to support “Frocktober”.

Frocktober is a fundraising initiative and awareness campaign in Australia to support the Ovarian Cancer Research Foundation.

While it isn’t an official New Zealand fundraiser, the Department has leapt behind the cause to honour Dr Gold, who told them in May at a breast cancer awareness morning tea she had organised, that she would be taking part in Frocktober.

“She was going to wear a dress every day for the month,” a member of the Frocktober organising committee Joanne Gillum explains. "It would have been a challenge for her. We never ever saw her in a dress."

"She was going to wear a dress every day for the month. It would have been a challenge for her. We never ever saw her in a dress."

Dr Gold, a highly regarded cancer researcher, lost her own battle with cancer in late August. Her obituary featured on Otago Bulletin Board.

“We wanted to carry out something in her memory.”

Sara Ferreira, another member of the organising team, says while most members of the Department are not wearing dresses every day, most are wearing one at least once. Various lab groups have chosen a day to don a frock – and much hilarity has ensued when their pictures are placed on display in the Department’s tea room.

“We are also trying to use the month to pass on information about ovarian cancer, with flyers available for staff to read,” she says.

Ms Ferreira says Dr Gold was always one to get behind a fundraising cause.

“I think she would be really proud of us.”

• Ovarian cancer is the fourth leading cause of cancer death in New Zealand women.
• It can be difficult to diagnose because the symptoms can often initially be mistaken for other health matters.
• Symptoms include persistent pelvic and abdominal pain, persistent bloating, difficulty eating and feeling full quickly and extreme tiredness.
• Unlike other cancers, there is NO early detection test.
• Ovarian cancer has a lower survival rate than both breast and cervical cancer.
• 80 percent of women are already in the advanced stages of the disease when diagnosed.