The fine line between playing God and saving species 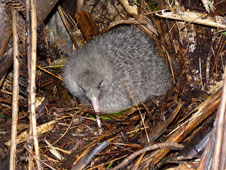 New Zealand conservation workers are keen on gene-editing to eradicate pests but would rather avoid “playing God” with native species, a University of Otago study suggests.

In an article published today in Nature Ecology and Evolution, researchers from the Departments of Anatomy and Zoology outline the views of 148 Department of Conservation (DOC) staff over the use of both gene-editing to save endangered animal species and “de-extinction” to resurrect those already lost.

Dr Helen Taylor, who co-led the study, is concerned that conservation practitioners are being left out of discussions on synthetic biology techniques like gene-editing.

She says the survey was a chance to assess how conservation workers feel about these issues, and the results were “striking”.

New Zealand is arguably an ideal testing ground for de-extinction and gene-editing, given the number of species which have become extinct in the past 150 years, its invasive mammal predators and the number of native species with very low genetic diversity.

But Dr Taylor says there is clearly strong opposition from some conservation practitioners to the idea of resurrecting extinct species when doing that might divert funding away from existing conservation projects.

Of those surveyed, 62 per cent considered de-extinction would be impossible to achieve in their lifetimes, while 47 per cent thought it could be a useful conservation and pest control, tool.

However, attitudes to gene editing depended on its application, Dr Taylor says.

“When we asked DOC staff whether they would be prepared to consider gene editing to save a native species from extinction, 41 per cent of respondents said they would rather see the species go extinct.

“Yet when we flipped that question to ask whether gene editing should be used for eradicating introduced species, 85 per cent were in favour.

“It’s interesting that people had real concerns about ‘playing God’ when it came to native species, but not so much for the perceived ‘bad guys’ – the invasive species.

“These concerns about ‘playing God’ demonstrate that attitudes towards synthetic biology, including gene editing and de-extinction, are not always objective or information-based. These are value judgments with ethical implications – simply providing more information may not change opinion on these topics for conservation practitioners or anyone else.”

Dr Taylor says progress in gene-editing and de-extinction research is rapid and scientists are “likely not too far off splicing genes from extinct species into embryos of their modern relatives”.

“Securing the support of many parties, including conservation practitioners, will be the key to the success of any synthetic biology-conservation endeavour. That’s because it’s likely the burden of maintaining a resurrected species in the wild, or managing the outcomes of a gene-editing intervention, would fall on those already under-resourced conservation staff.”

“It is widely acknowledged that a gap exists between genetics research and conservation practice, which could widen with increased use of genomics.

“It is therefore vital to understand practitioner attitudes to conservation-driven de-extinction and gene-editing. This is a good start, but the conversation needs to continue.”

The study was co-authored by Associate Professor Yolanda van Heezik, of the University’s Department of Zoology, and Dr Nicolas Dussex, formerly of the Department of Anatomy but now at the Department of Bioinformatics and Genetics at the Swedish Museum of Natural History in Stockholm.