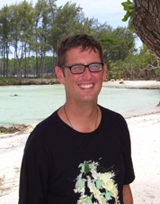 Gregory Rawlings is a Senior Lecturer in social anthropology in the Department of Anthropology & Archaeology at the University of Otago. Greg's research and teaching focuses on processes of globalisation, transnationalism and citizenship. He is a social anthropologist with a strong commitment to inter-disciplinary work that traverses history, law and economics to engage with finance, taxation, international relations and political economy.

Greg's PhD (2003) in Anthropology from the Australian National University (ANU), was based on 23 months ethnographic fieldwork in Pango village (a peri-urban community located just outside of the country’s capital, Port Vila), where he explored the social, cultural and economic impacts of the Vanuatu tax haven on indigenous livelihoods. From 2002–2005, Greg was Post-Doctoral Fellow at the Centre for Tax System Integrity (CTSI) at the ANU where he carried out multi-sited and mixed-methods research on tax compliance in Australia, offshore finance in Andorra, Guernsey, Samoa and Singapore, and money laundering in The Netherlands. From 2006-2007, Greg lectured in the School of Archaeology & Anthropology at the ANU. During this period he pursued a number of applied anthropological projects and collaborative research endeavours with external agencies, most notably Australia’s AusAID, examining governance, oversight institutions (auditors general, ombudsmen, parliamentary accounts committees and financial intelligence units) and leadership codes in the Pacific.

Since his appointment at Otago in June 2007, Greg has embarked on a new research project that is informed by thematic interests in history and anthropology, and law and society, to examine questions of 'race', citizenship and human rights in Vanuatu, as part of British colonial policy during the decolonisation of empire in the second half of the twentieth century. The first of a series of findings from this research are available in articles published in History & Anthropology, The Journal of Pacific History, TAJA: The Australian Journal of Anthropology, Twentieth Century British History, and a book chapter in the edited collection (Eds. J. Leckie, A. McCarthy & A. Wanhalla), Migrant Cross-Cultural Encounters in Asia and the Pacific, published by Routledge.  Although Greg's research areas are diverse, they are unified by an interest in the relationship between law, society and culture within the historically informed paradigms of transnationalism, globalisation and citizenship that frame much of contemporary social and cultural anthropology. He also works with a number of MA and PhD postgraduate students working in areas of transnationalism, globalisation and citizenship and in August 2011, Greg's supervision was recognised with the Top Humanities Supervisor of the Year award at the University of Otago.

Dreux (Drew) Richard. The Rising Sun in Africa: Japan, Biafra and the Grey Market Between.

Ben Wate. Negotiating the Sacred Space: A Comparative Study of the Impact of the Dynamics of Culture and Christian Theology on Women in the Anglican Church of Melanesia.

Erena Robins. Mapping Changing Narratives of Fear: Public Reactions Towards Refugee Flows in the US and Germany.

Rochelle-lee Bailey, Working the Vines: Seasonal Migration, Money and Development in New Zealand and Ambrym, Vanuatu. 23/03/2010-29/10/2014.
A copy of this thesis can be read here: https://ourarchive.otago.ac.nz/handle/10523/5063
Rochelle is now Research Fellow at the ANU College of Asia and the Pacific, Australian National University. More information about her current research is available at: https://researchers.anu.edu.au/researchers/bailey-r