The Denis Stewart Pathology Museum is a central resource for undergraduate pathology teaching at the University of Otago, Christchurch.

History of the Stewart Pathology Museum 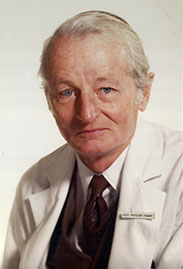 The foundations of the Museum were laid more than 100 years ago when a small number of specimens were prepared in Christchurch Hospital by the Medical Superintendent Dr Stephen Fox.

The earliest surviving specimens in the collection are those in glass jars which were prepared by the first technologist, Tom Ross, when the pathology department was established in the Christchurch Hospital in 1912.

A number of specimens were prepared by Dr Dennis Stewart in the late 1940s following his return from World War II. The collection at that time was somewhat of an orphan, with the specimens housed in the only suitable area available - the pathologist’s bathroom.

Most of the current collection was prepared in the 1970s under the stewardship of Dr Stewart. Specimens were steadily added until the mid-eighties.